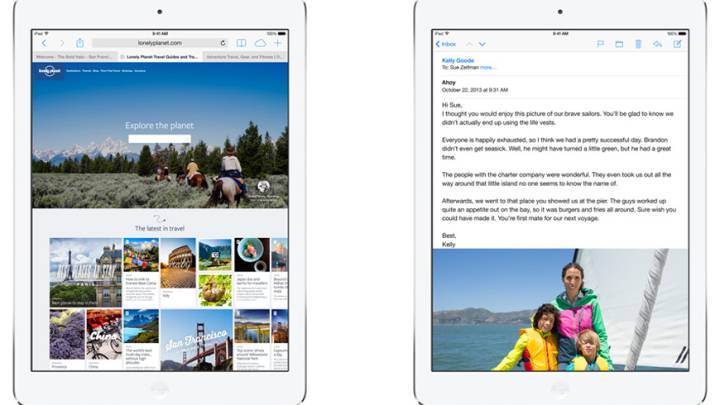 Apple on Tuesday finally took the wraps off of its fifth-generation iPad Air and we’re not going to even try to pretend to be surprised. Apple’s fall event is underway and among the stars of the show is the all new iPad, which underwent a complete overhaul for 2014. In line with countless leaks and rumors, Apple’s fifth full-size iPad features a brand new design that aligns perfectly with the smaller iPad mini. The tablet is thinner and narrower than the fourth-generation iPad it replaces, and it features a smaller bezel that wraps around the same 9.7-inch Retina display found on Apple’s past previous iPad model.

The new iPad Air is just 7.5mm thick, 20% thinner than the current full-size models and weighs just 1 pound, down from 1.4 pounds. The iPad Air will feature the 64-bit A7 chip and M7 motion co-processor inside, just like the iPhone 5s, plus the CPU and GPU will be twice as fast as the previous generation of iPad. The tablet’s Wi-Fi will be twice as fast as well, supporting the new MIMO 802.11n. The iPad Air will also have a 5-megapixel iSight camera, 1080p video, a new FaceTime HD camera, dual microphones, and 10-hour battery life.

Apple’s new tablet will be available in two colors: Space Gray and Silver. The iPad Air will start at $499 for the 16GB Wi-Fi model and $629 for the cellular model, and the new slate will officially go on sale on November 1st.