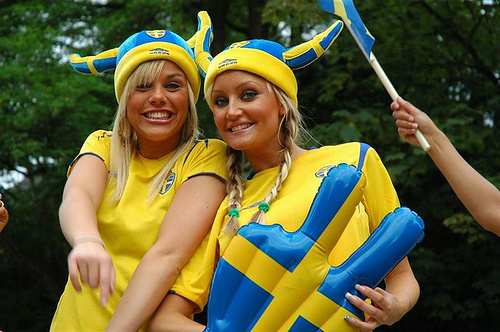 In many ways, the United States is way ahead of the curve when it comes to LTE service since we have three major carriers that offer LTE in the majority of major markets throughout the country. But GigaOM points us to a new study from British network-testing firm OpenSignal showing that while America has the most overall LTE networks of any country, it only ranks eighth in terms of network speeds with an average download speed of 9.6Mbps. In this respect, the U.S. trails LTE speed champion Sweden, whose networks deliver average download speeds of over 22Mbps, as well as its northern neighbor Canada, whose networks deliver average download speeds of just over 18Mbps.

“While most operators around the world secured 40 MHz of spectrum with which to launch their new 4G networks, U.S. carriers have been working with smaller swatches of airwaves,” GigaOM notes. “Verizon (VZ) and AT&T (T) are using 20 MHz for their initial rollouts, while Sprint (S) and MetroPCS are dealing with as little as 10 MHz. If you’re working with half the spectrum, your connections will sport half the bandwidth.”

From this perspective, it’s easy to see why American carriers are relentless in coming up with creative new ways to acquire more spectrum — they know that it’s key to delivering faster LTE services in the future.