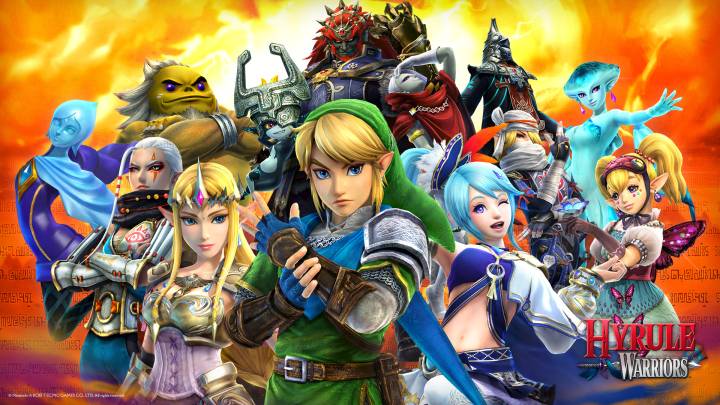 Playing Hyrule Warriors is like playing with action figures — it’s not a great representation of how a war in the world of The Legend of Zelda would actually play out, but with a little imagination, everything comes to life. Hyrule Warriors is a bit of a mess, but once you become acclimated to the oft-repeated gameplay loop, there’s plenty of fun to be had.

The first thing to note about Hyrule Warriors is that it is not a Zelda game. There are no puzzles, no dungeons, no seamless overworld to explore. Hyrule Warriors is a game in the “musou” genre, popularized by Dynasty Warriors. What that means is that you will be plopped on a large map filled with enemies –hundreds and hundreds of enemies — which you are free to hack and slash to your heart’s content.

Throughout the map there are keeps which you can capture by defeating enough grunts to attract the attention of the keep boss. After finishing the boss off, your own forces will take control of the keep.

The twist here is that everything in the game is coated with Zelda-themed paint: the playable characters, the enemies, the landscapes, the bosses and even the plot. All pulled from the annals of the Zelda series. Other than that, it’s pretty much business as usual; capturing keeps and massacring thousands of enemies.

As you travel from keep to keep, you’ll be regaled with new objectives from your Hyrulians companions, telling you that a threat has appeared on some far corner of the map or that one of your previously captured keeps is at risk of falling. Inevitably, you’ll be doing a lot of running back and forth.

If any of this has sounded offensively boring so far, Hyrule Warriors probably isn’t for you. On the other hand (similar to what I experienced in my first few hours with Destiny), once I fell into a rhythm, the game began to flow. It never overwhelmed me, never took me by surprise, but it also moved quickly enough to keep my interest. Again: it’s a very particular kind of game, but if swinging a sword through 100,000 Darknuts, Moblins and Stalfos sounds like something you might enjoy doing over the course of a few hours, Hyrule Warriors is worth a look.

Nintendo has also carried its mastery of the carrot on a stick over to Hyrule Warriors. Throughout Legend Mode, the story mode of Hyrule Warriors, you’ll run across nearly a dozen playable characters from the world of Zelda, each with their own unique set of upgradeable weaponry. It basically boils down to light, medium and heavy characters, in terms of how they play, but that doesn’t make blasting through a level as Ganondorf any less rewarding.

As you work your way through the game’s many stages, you’ll collect a large variety of materials which can be used in the game’s Bazaar to buy attack, defense and assist badges for each of your characters. These badges will increase the length of attack combos, give characters the ability to carry potions, make them resistant to certain types of attacks and more. Your characters will gain strength as they level up, but badges are Hyrule Warrior’s version of individual stat upgrades.

Weapons can also be collected on your journeys, each of which pertain to a specific character. These can be combined in order to apply status effects or sold for rupees, the game’s currency. I spent all of my rupees in the Training Dojo, which allows you to level a character up to the highest level of any of your unlocked characters without having to play with them for hours on end. Hyrule Warriors is fairly deep with its RPG mechanics.

Hyrule Warriors is also a cheater. It’s not unfair — in fact, I found a majority of the game disappointingly easy on the default difficulty setting — but it throws a sheet of nostalgia over any potential problems, from the almost nonexistent AI of allies and enemies to the inexplicable repeated levels near the end of the Legend Mode. So much Zelda was packed into Hyrule Warriors that I was constantly on the brink of convincing myself I was playing the first Zelda for Wii U… until I was inevitably asked to travel the length of the battlefield once again in order to capture a keep I could have sworn I’d just captured.

When you decide to take a break from the story, there are a few other modes to keep you busy, including Free Mode, Adventure Mode and Challenge Mode.

Adventure Mode, the main attraction outside of the story, puts players in control of a small on a grid ripped straight from the original Legend of Zelda on NES. As you clear missions, more of the map will be traversable. There’s plenty to collect and unlock in Adventure Mode as well, including a few characters that can’t be unlocked in Legend Mode.

Finally, Challenge Mode (which is actually part of a patch that will be available for Hyrule Warriors on release day) tasks you with completing a series of specific challenges in order to advance. It’s fairly bare bones, but a fun distraction nevertheless.

Hyrule Warriors isn’t the game I expected to grab me this month, but it’s the one that did. With some fun RPG mechanics, repetitive yet entrancing gameplay, a coherent (if obvious) story and a whole mess of nostalgia lathered on top, Koei Tecmo’s Zelda musou managed to rise above the gimmick. If you’re looking for some mindless fun in one of your favorite universes, Hyrule Warriors shouldn’t disappoint.

Nintendo provided BGR with a copy of Hyrule Warriors for this review.