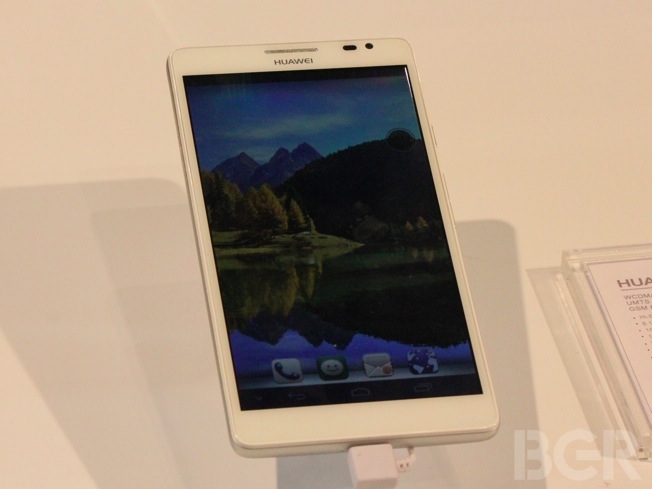 Taking a hands-on look at Huawei’s (002502) new Ascend Mate “phablet” really does require you to use both hands, because the thing is absolutely enormous. Boasting a 6.1-inch display, the Ascend Mate first made its debut at Consumer Electronics Show earlier this year, but it still deserves special notice more than a month later because it’s a hulking beast of a phone that simply commands your attention from the moment you try to lay your hands on it.

The first thing you notice about the Ascend Mate is, obviously, its big, beautiful display. The screen’s resolution is set at 1280 x 720 pixels, which is somewhat low for such a large display — for comparison, the Galaxy Note II display has the exact same resolution despite having a smaller 5.55-inch display. The good news is that you don’t at all notice this comparative lower pixel density at all because the Ascend Mate’s display is gorgeous, full of bright colors and crisp images.

The large display also lets Huawei implement a really cool radial menu that can be placed anywhere on the phone’s screen. The menu, which appears on the screen as a small dot roughly the size of your pinky finger nail, gives you quick access to apps such as email, contacts and a notepad, ensuring that you don’t have to waste screen space by having those app icons up on your home screen.

The downside of the Ascend Mate, however, is the same downside with phablets in general: it’s just too large to credibly use as your primary mobile phone. This is particularly true of the Ascend Mate, which exceeds even the Note II’s standards for bigness and will likely only feel comfortable to hold if you’re Dwight Howard.

But if you just can’t resist the allure of a large screen or are an NBA star looking for a device that your huge hands can comfortably type with, the Ascend Mate may be worth a look.