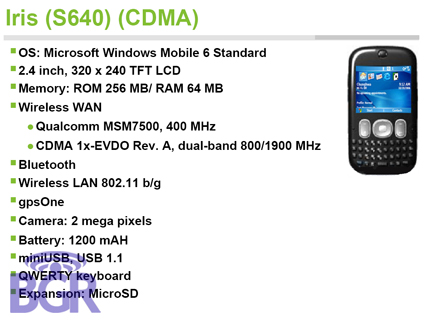 Well, well, well. Look what just fell into our lap! HTC has kept some of these devices on here pretty much under wraps but it is nice to finally get a sneak peak once and again. One of the standout handsets on here is the HTC Touch, with one small differentiation from the standard model. This one is CDMA. Codenamed Vogue, it could possibly get those Verizon-loving monsters excited. Something else which was long overdue is the HTC Excalibur which should also be making its CDMA debut pretty soon. That model is the HTC S640, which will pack a 2 megapixel camera, 400MHz processor, 256MB of ROM, 64MB of RAM, and gpsOne. Other phones on the sheet are the HTC Kaiser, HTC Nike (P5500), HTC Volans (HTC Wings), HTC Polaris, HTC X9500 which we are assuming is the HTC Shift, and finally the HTC Sedna. This will be an interesting summer, for sure!