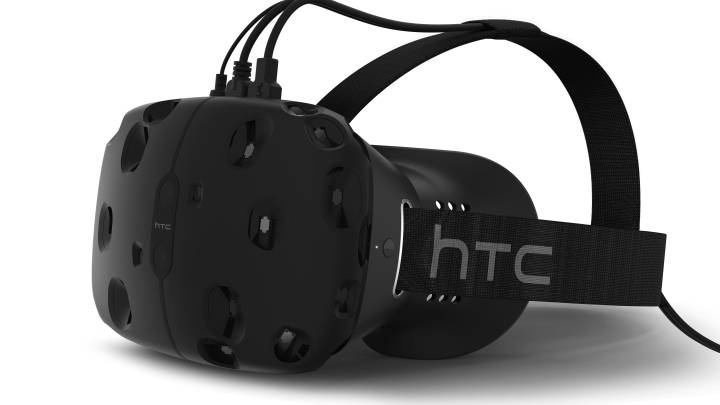 The surprises just kept coming at HTC’s MWC press conference on Sunday. After unveiling the HTC One M9 and the HTC Grip (the company’s first wearable), CEO Peter Chou took the stage to introduce yet another new product: the Vive virtual reality headset.

HTC is partnering with Valve to bring its own virtual reality headset to market. The Vive [official site] combines Valve’s Steam VR technology with HTC’s design, bringing to life a device that might stand a chance against the Oculus Rift and Sony’s Project Morpheus.

“It’s rare that a company has an opportunity to forever transform the ways in which people interact with the world and communicate with each other, but that is exactly what we plan to do with Valve,” said Cher Wang, Chairwoman of HTC.

The Vive features two 1200 x 1080 displays in front of each eye at a blazing 90 frames per second. A headphone jack sits on the side of the Developer Edition so that you can plug in your favorite earplugs or headphones. A gyrosensor, accelerometer, and laser position sensor are all contained within the device as well.

In addition to the Vive, Valve and HTC are also working on base stations to track your physical location and allow you to actually get up and explore the virtual environment.

HTC plans to release the Vive Developer Edition this spring, with a final consumer edition scheduled to launch before the end of 2015.

The full press release follows below:

Barcelona, Spain, March 1, 2015 – HTC, a pioneer in innovative, smart technologies, today announced plans to bring mass-market virtual reality (VR) one step closer. Through a strategic partnership with Valve, HTC promises to transform the way in which consumers interact with technology and the world around them with the debut of HTC Vive. HTC Vive Developer Edition will be launched this Spring, with the consumer edition available by the end of 2015.

Vive combines Valve’s Steam VR tracking and input technologies with HTC’s world- renowned design and engineering talent, setting a new gold standard for an industry that has, until now, struggled to move beyond concept stage.

Cher Wang, Chairwoman of HTC commented, “It’s rare that a company has an opportunity to forever transform the ways in which people interact with the world and communicate with each other, but that is exactly what we plan to do with Valve.”

“We achieved this once before with our development of smartphone technology,” Peter Chou, CEO of HTC added, “And, through our partnership with Valve, we’ll now be doing this for a second time with VR technology of which consumers could only previously dream.”

Vive offers the most immersive experience of any VR package, plunging people into other worlds at a moment’s notice. HTC and Valve have introduced a Full Room Scale 360 Degree Solution with Tracked Controllers, letting you get up, walk around and explore your virtual space, inspect objects from every angle and truly interact with your surroundings. Setting a new benchmark for performance, the headset features high-quality graphics, 90-frames-per-second video and incredible audio fidelity.

HTC is also introducing new wireless VR controllers that will make you feel one with your virtual environment. The new HTC VR Controllers come in a pair and are designed to be so versatile that they will work with a wide range of VR experiences. Unlike typical game controllers, the HTC VR Controllers are simple and intuitive to use, helping everyone make the most of their experience.

“Our collaboration with HTC is driven by the companies’ shared desire to produce the most compelling and complete VR experience,” said Ken Birdwell of Valve. “Delivering content creators with the Vive Developer Edition is an incredibly important milestone in our efforts to achieve that goal.”

While amazing gaming experiences are a staple in the VR universe, the potential beyond gaming is limitless. HTC and Valve are committed to realizing a broader vision for VR and see a real opportunity in transforming everyday experiences. Travel, attending a game, meeting friends or even shopping will never be the same again, and the companies are working with leading content creators, including Google, HBO, Lionsgate and the National Palace Museum in Taiwan in order to make that vision a reality.

“Vive creates an exciting opportunity for all developers and content creators, to help us bring virtual reality into the mainstream with an end-to-end solution that completely redefines how we entertain ourselves, communicate with each other, learn and, eventually, how we become more productive,” Cher Wang concluded. “HTC Vive is real, it’s here and it’ll be ready to go before the start of 2016.”