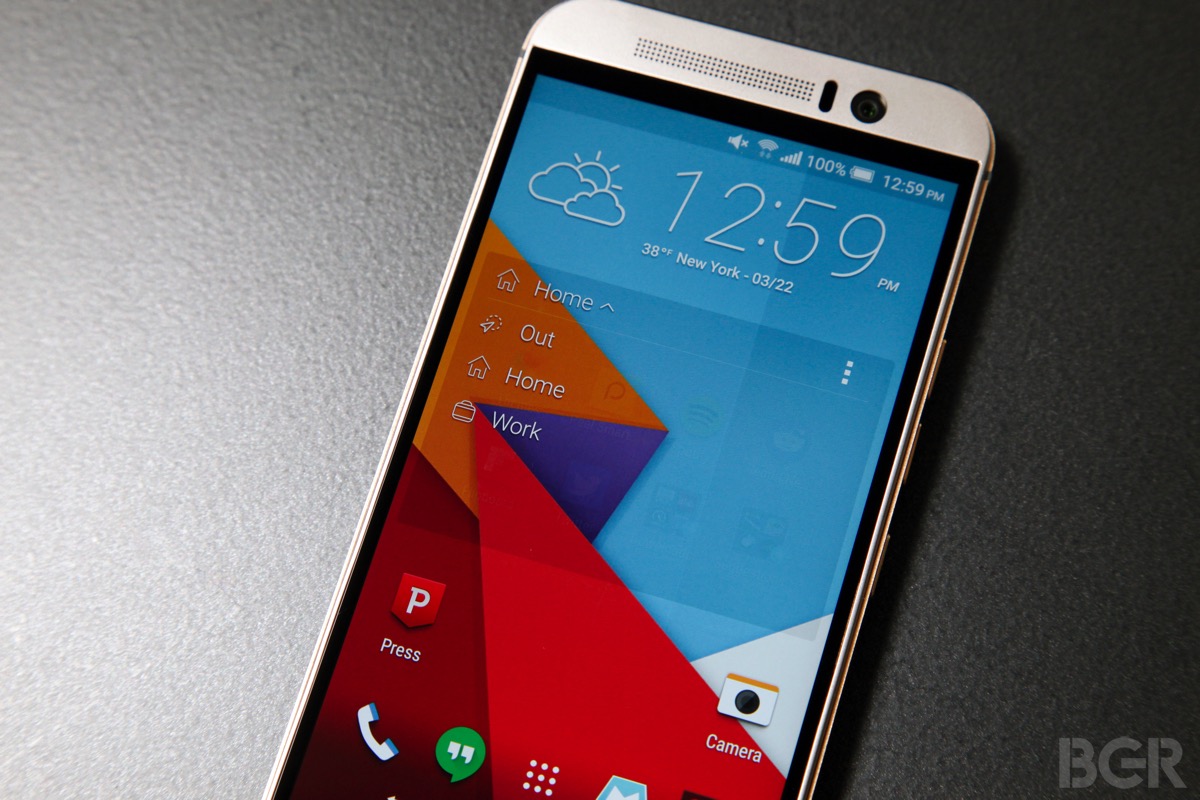 T-Mobile and AT&T on Thursday both unveiled preorder details for the HTC One M9. Buyers looking to score the new HTC flagship handset should know that, while the two carriers have rather similar offers, T-Mobile’s price is slightly better than AT&T’s, especially for off-contract purchases.

Both carriers will ship the handset on April 10th. Their full press releases follow below.

UPDATE: Sprint’s announcement has been added to the end of this post.

Bellevue, Washington − March 26, 2015 − If you love to be first, love a great value − and don’t mind being stared at − T-Mobile (NYSE: TMUS) has news for you. The Un-carrier’s offering the crave-worthy new HTC One M9 for purchase at T-Mobile.com starting tomorrow at 6:00 a.m. PDT for $0 down (and $27.08 a month for 24 months). Which means you could order HTC’s latest beauty and have it delivered to your door weeks before it’s available for everyone else. For those who want to see, hear and feel the device firsthand, the HTC One M9 will be available at most T-Mobile stores nationwide on April 10.

“The HTC One has built a fanatical following, and the M9 will be a favorite whether you’re a fan boy or soon-to-be convert,” said John Legere, president and CEO of T-Mobile. “And with Carrier Freedom, there is absolutely nothing stopping anyone from picking up HTC’s latest at the Un-carrier.”

Launched earlier this month, Carrier Freedom™ demolishes the final obstacle customers face when making the move to T-Mobile. On top of paying your early termination fees, the Un-carrier will now cover every cent of your remaining device payments when you switch to T-Mobile and trade in your old phone.

• Iconic all-metal unibody design with a new dual finish that is as distinctive as it is durable.
• 20MP Main Camera with sapphire camera lens delivers crisp, clear photos and durable scratch resistance for long-lasting use. The UltraPixel front camera provides photo and imaging control like never before.
• HTC BoomSound™. With dual front-facing speakers and 5.1 channel Dolby® Audio Surround, HTC BoomSound™ has two modes (theatre and music) to deliver the ultimate audio experience for movies, gaming and music − the perfect complement to T-Mobile® Music Freedom.
• UH OH Protection from HTC, a first-of-its-kind which provides a one-time replacement within the first 12 months of purchase for cracked screens or water damage.
• Ships with Wi-Fi Calling. T-Mobile is one of the only U.S. wireless providers that will support Wi-Fi calling out of the box, allowing customers to make calls beyond the reach of any cellular network.

Learn more or be one of the first to get your hands on the new HTC One M9 athttp://explore.t-mobile.com/htc-one-m9.

DALLAS, March 26, 2015 – Starting on March 27, you can order the HTC One® M9 from AT&T1 on www.att.com or at AT&T retail locations. The HTC One M9 will ship the same day if the order is received by 1:00 p.m. CT. The smartphone will be available in AT&T retail stores nationwide starting Friday, April 10.

HTC One M9 Features
The HTC One M9’s luxurious design features a metal unibody available in Gold on Silver or Gunmetal Gray. Complete with a bright 5-inch full HD 1080p display and BoomSound™ speakers with 5.1 channel Dolby®surround sound simulation, the HTC One M9 is great for watching videos or listening to music. Capture amazing photos with the smartphone’s rear-facing 20 megapixel camera with a scratch resistant sapphire lens cover or the UltraPixel™ front-facing camera. With Zoe™ you can combine your pictures, video and music to create personal movies that can be shared on your favorite social networks. It is HD Voice capable5and runs Android™ 5.0 Lollipop with a Qualcomm Snapdragon™ 810 Octa-core processor and a 2840mAh battery. Check out the HTC One M9 Mobile Minute for additional smartphone features.

Supporting Quote
“The HTC One M9 builds on the legacy of its award winning design and premium performance. The evolution of the smartphone’s metal unibody design combines a premium user experience on the network with the nation’s strongest LTE signal.  In addition, AT&T’s flexible pricing plans let you choose the plan that works best for you without having to put any money down.” – Jeff Bradley, senior vice president, Device Marketing and Developer Services, AT&T

Device Eco-rating
The HTC One M9 earned four out of five stars on AT&T’s Eco-Rating system. The system rates the environmental factors of AT&T branded handset devices. AT&T created the Eco-Rating system to empower consumers to make better informed decisions when selecting a device. For more information about this device’s rating, AT&T’s Eco-Rating System, and how you can join AT&T in making a difference, please visithttp://att.com/ecospace.

1AT&T products and services are provided or offered by subsidiaries and affiliates of AT&T Inc. under the AT&T brand and not by AT&T Inc.

4Access charge is for wireless service only. Device costs are separate. An eligible Mobile Share Value plan (minimum plan starts at $20/mo.) and $10/month access charge is required.  Restocking fee (up to 10% of purchase price), other charges and restrictions apply.

5AT&T HD Voice has limited availability in select markets and may not be available in your area.  To experience HD Voice, both parties must be in AT&T HD Voice coverage using AT&T HD Voice-capable devices. Other restrictions apply.  See www.att.com/hdvoice for details.

OVERLAND PARK, Kan. – March 26, 2015 – The new HTC One® M9 will be available for shipment from all Sprint (NYSE: S) sales channels, including Sprint Stores, Telesales at
1-800-SPRINT1 and www.sprint.com, beginning Friday, March 27.

HTC One M9 is available through Sprint Lease for $0 down and $20 per month. For only $10 more, customers can upgrade to a 12-month lease with $0 down and the opportunity to upgrade to a new phone annually.

With Sprint Lease, qualified customers pay zero out of pocket at lease signing for their smartphone. At the end of 24 months, customers in good standing currently have the following options1:

Sprint will pay whatever it costs to switch, including early termination fees and remaining payments on the phone installment plans – no matter what is owed. Customers simply need to switch to Sprint and turn in their current phone. Sprint will refund the switching costs within approximately 15 days of successfully completing the online registration and providing a bill that shows the early termination charge or device balance due.

“If you’re considering the beautiful new HTC One M9, now is the time to rediscover Sprint,” said Doug Kaufman, director-Device Strategy, Sprint. “The Sprint network provides significantly better call quality and faster data speeds in more places than before. With our great rate plans, including the Cut Your Bill in Half Event, and our offer to pay your costs to switch, including early termination fees, you have a wonderful opportunity to save money every month on one of the hottest smartphones of 2015.”

For a limited time only, Sprint is also offering the new Harman Kardon One wireless Bluetooth® speaker for $99.99 (plus tax) when purchased with HTC One M9 – a $50 savings.

Harman Kardon One is an HTC Connect certified device that easily connects to HTC smartphones with a simple three finger swipe. It also features:

Luxurious Inside and Out

Announced at Mobile World Congress in Barcelona, the new HTC One M9 is luxuriously designed with a dual tone metal unibody, jewelry-grade finish and comes in Gunmetal Gray and Gold on Silver.

Following a multiyear overhaul, the Sprint network now provides significantly better call quality and faster data speeds in more places than before. Additionally, according to RootMetrics, metro results for second half 2014 show Sprint with the highest net gain in first-place or shared first-place RootScore and network award wins in Overall Performance, Reliability, Call and Text.2