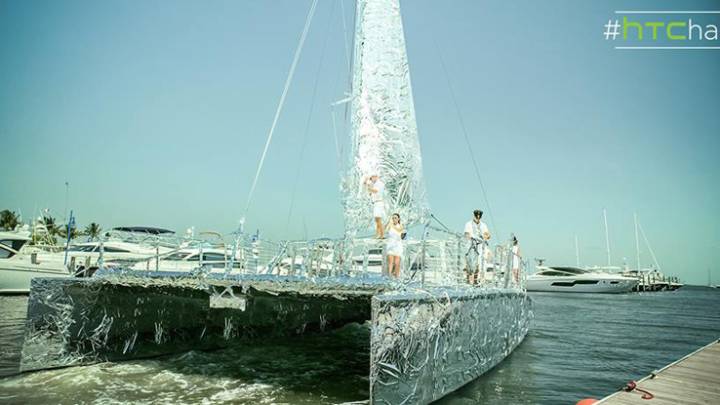 HTC’s new billion dollar marketing campaign is kicking off. And it’s built entirely on whimsy. It features Robert Downey Jr. in a series of wacky situations that have nothing to do with actual HTC phones. You can picture the ad executives doing the pitch to panicky HTC executives: “You guys have been way too serious, much too focused on hardware specs and performance comparisons. Time to ditch that angle and go weird!” It is true that HTC ads have been boring and nerdy, but it is extremely rare to see a handset brand jettison its entire old brand image and try to execute a total U-turn. The violence of this shift in direction combined with the magnitude of the new marketing drive is creating a bizarre spectacle.

Phone brands adjust their direction all the time. Half a decade ago, Samsung was a value option — it sold touch display phones that were markedly cheaper than the iPhone. The trade-off was that you got great display quality and a cheap price, but had to tolerate a lousy UI and a dodgy OS. Gradually, Samsung moved up the price ladder and now the Galaxy S and Note series are battling with iPhone at the very top of the smartphone market. Samsung still sells budget phones, but it has added a glittery layer of luxury sheen on its brand.

That was a brand adjustment executed slowly and well.

What HTC is now trying to achieve is far more abrupt and harder to fathom. It has been a nerdy smartphone brand focused on competing against Samsung’s high-end models at same or only slightly lower price points. Now HTC seems to be trying to communicate that it isn’t boring at all — it’s actually hip, loose, wacky and slightly dangerous. Just like Robert Downey Jr.

The problem here is that the new message is entirely at odds with the current perception of the brand. This is like rebranding Jello as a sexy, sophisticated dessert option for urbane hipsters. This kind of total revamp is almost never attempted, because it almost never works.

It is possible to rebrand anything. In Russia, Stolichnaya is a tacky blue-collar vodka bought by manual laborers. It got successfully branded in America as a high-end luxury beverage. Bully for Stoli. But the trick only worked because the vodka did not have a defined image in America before branding magic turned a toad into a prince.

HTC does have a clearly defined image among smartphone buyers: it’s that expensive brand that’s not as cool as Apple or Samsung.  How does showing trolls washing a car change that perception, which happens to be cruelly accurate? What HTC needs is compelling smartphones under $300 without a contract. It does not currently have them.

You have to admire this Hail Mary pass for its sheer, sweaty, desperate gumption though. This is an epic gamble that will live forever in the annals of phone marketing. But the likelihood that it will help HTC escape the full consequences of its dreadful pricing strategy mistakes is slim.