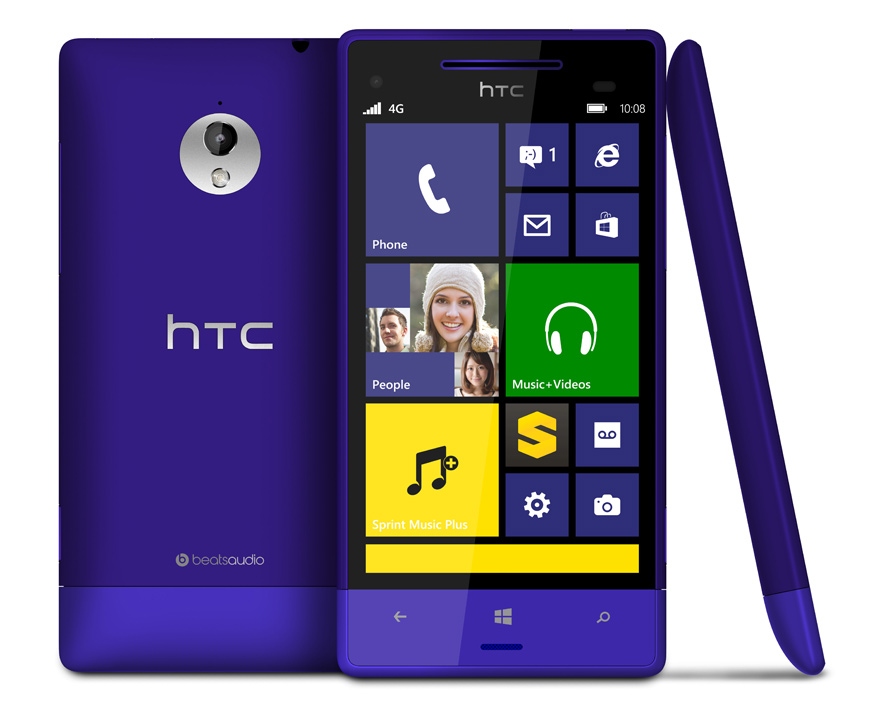 Sprint on Wednesday unveiled two new Windows Phones ahead of Microsoft’s annual Build conference, which kicks off later in the day. The HTC 8XT sheds the “Windows Phone” from its name, though its design appears very similar to the “HTC Windows Phone 8X” that launched last year. The phone adds dual front-facing “BoomSound” speakers, however, and specs include an 8-megapixel camera, a 1.4GHz dual-core Snapdragon processor, 1GB of RAM, 8GB of internal storage, microSDHC support and a 4.3-inch display, The 8XT will cost $99.99 on contract when it launches this summer.

Complementing the 8XT in Sprint’s upcoming lineup is the Samsung ATIV S Neo, another Windows Phone from Samsung that sports a wonderfully forgettable name. Key specs include a 1.4GHz dual-core processor, 1GB of RAM, microSDHC support, a 4.8-inch HD display and a 2,000 mAh battery. The ATIV S Neo will cost $149.99 on contract and it also launches later this summer.

SAN FRANCISCO (BUSINESS WIRE), June 26, 2013 – Sprint (NYSE: S) and Microsoft Corp. today outlined plans to launch the first two Windows Phone 8 smartphones to offer Truly UnlimitedSM Sprint 4G LTE this summer – HTC® 8XT and Samsung ATIV S™ Neo. Customers will appreciate access to the advanced features and capabilities of these devices with the benefit of unlimited 4G LTE (available in select markets) data, text and calling to any mobile with no metering, no throttling, and no overages, all while on the Sprint network.

“We know our customers are anxious to get their hands on these Windows Phone 8 smartphones, HTC 8XT and ATIV S Neo,” said Fared Adib, senior vice president-Product Development, Sprint. “Without a doubt, they will rival any smartphone on the market today. Our customers will appreciate being able to use them all day, every day without worrying about overages or data caps.”

Windows Phone 8 won the PC Magazine Readers’ Choice Award for best mobile operating system in March 2013. The only phone with Live Tiles, Windows Phone 8 offers a truly personal smartphone experience designed to keep customers connected to the people and things that matter most. Windows Phone brings together the best of Microsoft with the same modern look and feel, including Bing, Office, Xbox and Skype, for a rich customer experience. In addition, the Windows Phone Store includes more than 160,000 apps to choose from, with hundreds added daily.

”We are excited to be bringing the most personal smartphone experience to Sprint customers this summer,” said Terry Myerson, corporate vice president, Microsoft Windows Phone Division. “With compelling hardware from HTC and Samsung, coupled with unlimited 4G LTE from Sprint, these Windows Phones will offer the complete package.”

“Inspired by the design that won the prestigious ‘red dot award: product design 2013,’ the new HTC 8XT brings a truly crafted smartphone with brilliant color, soft-to-the-touch texture and tapered design to be comfortable in the hand,” said Mike Woodward, president North America, HTC Corporation. “A pleasure to hold and a pleasure to hear, the front-facing stereo speakers are a first for a Windows Phone and deliver sounds that demand to be heard.”

HTC 8XT is also ideal for photo buffs with an 8-megapixel main camera with autofocus and LED flash, and a front-facing 1.6-megapixel camera. The main camera takes great photos in bright-light and low-light situations, and the ability to shoot video and take still pictures simultaneously. It also offers multishot burst mode to help capture the best picture of a moving photo subject, and a dedicated Windows Phone camera button to open the camera quickly, even when the phone is locked or sleeping, so users never miss an opportunity to capture life’s most important moments.

“Samsung is committed to offering smartphones across a variety of platforms and the rich Windows Phone 8 experience on the ATIV S Neo is a testament to this effort,” said Kevin Packingham, Samsung Mobile chief product officer. “The ATIV S Neo makes it easy to stay in-the-know while connecting with friends, family and colleagues, through new sharing features and powerful productivity applications.”

Having ATIV S Neo in your pocket means users can do more with their smartphone camera. It will offer an 8-megapixel main camera with LED flash and a front-facing 1.9-megapixel camera for video chat. It will include a variety of camera apps preloaded, including the Beauty Shot mode for smoother looking skin in headshots, Manga Camera to give pictures a fun twist by turning friends and family into cartoons, and built-in Photo Editor that allows the user to edit, color, effect, decorate or share their pictures quickly and easily.

These smartphones also make it easy for customers to stay productive with Office Mobile for Windows Phone. With Office Mobile, people can access, view and edit Microsoft Word, Excel and PowerPoint documents from anywhere. Plus, customers can count on Office Mobile to keep content and formatting intact so documents still looks great when back on a PC, Windows tablet or Mac.

For the most up-to-date details on Sprint’s 4G LTE portfolio and rollout, visit www.sprint.com/network.