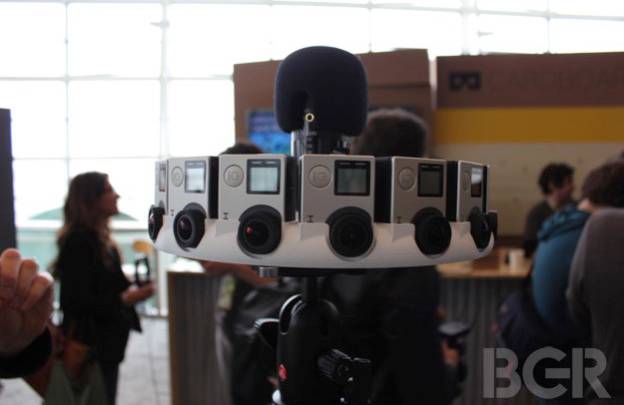 There were plenty of interesting announcements at Google I/O this year, but none had my head spinning quite like GoPro’s 16-camera, 360-degree virtual reality capture rig. This week, the company made the device official by giving it its own landing page on the GoPro site and by officially naming it the Odyssey.

READ MORE: Canon has an insane 250 megapixel sensor that can read lettering on a plane flying 11 miles away

Included in the package is about what you’d expect — 16 GoPro Hero4 cameras, 16 microSD cards, the Odyssey panoramic capture rig, cables, accessories and connectors to keep the whole thing together and a case to carry the monstrous device around in.

But if you’re thinking of picking one up yourself (and you’re not a professional filmmaker), you might be out of luck. Not only is the $15,000 (!) price tag a bit prohibitive, but GoPro says that due to limited production, only “industry professionals” will be eligible to purchase the capture rig. There’s even a registration form to prove your qualifications.

As The Verge astutely notes, this will be one the first device built specifically for use with Google’s Jump VR platform, so it makes sense that Google would only want the best content appearing online within the first weeks and months of the Odyssey’s launch. Once the first Jump videos begin to make their way online, providing they attract attention, expect the program to expand in the future.