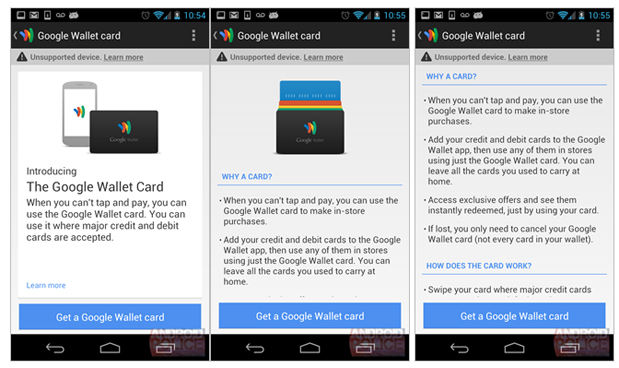 Launched in May 2011, Google Wallet was supposed to revolutionize shopping and replace cash and credit cards with NFC-enabled smartphones. While the idea was and still is ambitious, Google (GOOG) Wallet has been hampered by the reluctance of retailers and small businesses to upgrade their point-of-sale systems to support NFC. Last week, Android Police published what were alleged screenshots of Google’s plans for a “Google Wallet card” (GWC). Unlike the Google Wallet app for Android smartphones, the GWC doesn’t have any kind of NFC tech in it. It reportedly works just like the Google Wallet app and stores all of your credit cards in it, only you swipe it at checkout.

TechCrunch has followed up on Android Police’s scoop with news that Google already references the unannounced Google Wallet card on its help support site. But what’s the point of having a Google Wallet card? Well, as we wrote above, there are many places that don’t have point-of-sale systems that accept NFC payments and so a more analog swiping card system paired with the Google Wallet app could help drive mobile payment usage up.

Google is also reportedly touting the security of using its GWC. As shown in the screenshot above, if you lose your GWC, you only need to cancel that card and not all of the stored credit cards. TechCrunch reports that the GWC will have an app that works with any Android device running Android 2.3.3 and up. It’s currently unknown when the GWC will launch and if it’ll also be available on iOS.

It’s not Google’s fault that NFC mobile payments haven’t shot through the roof seeing as how 30 million NFC-enabled smartphones were shipped last year. The problem is on the retail end supporting NFC mobile payments. Until businesses start adopting mobile payments en masse, good old-fashioned swiping might have to do for the time being.