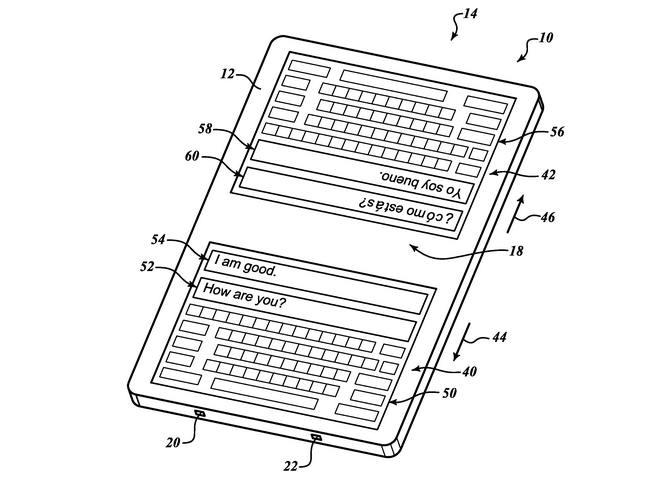 With so many awesome third-party keyboard apps out there, it can be hard to distinguish yours from the crowd. It seems that Google has been working on a keyboard app that really delivers something we haven’t seen in any other keyboard app so far: The ability to have conversations with people in multiple languages that will automatically translate for you with the help of Google Translate.

RELATED: Microsoft shows off its most incredible product in years

According to a Google patent filed two years ago and flagged by GreyBMusings, Google has designed a smartphone keyboard that essentially splits into two halves that let people type on opposite sides of the device. So if you’re writing something in English and you hit “send,” it will pop up on the other person’s side of the screen in whatever language you’re translating it into. Then when they respond on their keyboard, their reply will show up in English on your side of the keyboard.

While this is an incredible feature, we can see some pitfalls with it. In the first place, it’s difficult to imagine standing in a street in a foreign country and asking someone to type into your phone with you just because you need to know where the nearest bathroom is. Second, anyone who’s used Google Translate can tell you that while it does a largely fine job with core European languages, the further east you get, the less reliable its translations become. So while this feature would give you accurate translations of French and German, it might not be so handy for Arabic or Mandarin.

This also isn’t the only translator keyboard app we’ve seen, as the new Translator Keyboard lets you type in messages into your iOS keyboard that it will then translate into up to 40 different languages right on your display. That said, the app is different in that it’s meant for your eyes alone while the Google app is meant for people to chat with each other one-on-one.

Nonetheless, this is a cool idea and one that we hope Google can refine and eventually bring to market. Check out the whole patent filing yourself at the source link below.