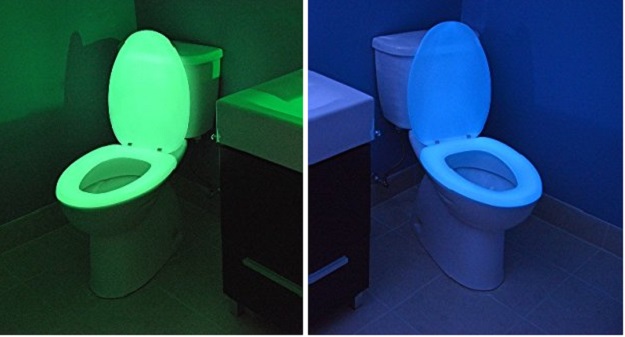 After years of having his idea for a glow in the dark toilet seat scoffed at, Dave Reynolds of Lebanon, Tennessee is the one having the last laugh. Reynolds’ product, appropriately called Potty Glow, is now available for purchase at Amazon, Home Depot, and Lowe’s for just $50.

“I kept telling this story over and over to people and they laughed,” Reynolds said during a recent TV interview, “and I said, ‘One day you’re not going to laugh at me. One day you’re going to go to the bathroom and think of me.’”

As far as ideas go, a glow in the dark toilet seat isn’t actually that bad. Under regular lighting conditions, the toilet seat looks completely normal. Yet once darkness falls, the seat emits a soft glow in either green or blue, a feature which Reynolds believes is extremely beneficial for both children and the elderly. Specifically, Reynolds notes that parents have told him that their kids no longer need to wake them up to go to the bathroom in the middle of the night, all thanks to the warm, welcoming glow of his toilet seat.

“Not right now, but at 3 o’clock in the morning, that’s when it comes together,” Reynolds explains. “When you get up in the middle of the night, you forgot you installed it, and you turn the corner and you go, ‘whoa!'”

Given the annoying pain that can result from turning a light on in the middle of the night, Reynolds just might be onto something here. As it stands now, he’s already shipping about 20 toilet seats a day.

As for the quality of the product itself, Reynolds claims that the glow is the same “that’s used by the U.S. military and NASA.” Lastly, Reynolds boasts that the seats will glow for about 15-20 years.