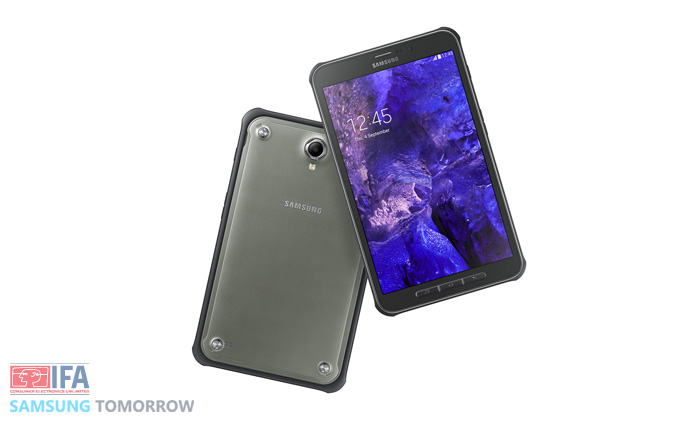 If there was one device everyone was waiting to see at this year’s IFA trade show in Berlin, it was the Galaxy Note 4. Poised to take on the iPhone 6 later this month, the Galaxy Note 4 is clearly Samsung’s priority for the immediate future, but that doesn’t mean the endless iteration on previous hardware releases is going to slow down any time soon.

Samsung took to its blog on Thursday to unveil the Galaxy Tab Active, a tablet designed specifically for business. As with other Active releases, the new Galaxy Tab is built to last — with its anti-shock covering, the tablet can safely withstand a drop of nearly 4 feet. It also dust and water resistant, which means that a messy job site won’t put the tablet at risk.

As you might expect, the specs don’t exactly line up with the Tab S, but it’ll get the job done. The Galaxy Tab Active features a 1280 x 800 resolution 8-inch display, 1.2GHz quad-core processor, 1.5GB of RAM, 16GB of internal memory (with microSD up to 64GB), 3.1-megapixel camera and Android 4.4 KitKat. It also contains a detachable 4,450mAh battery which should last between 8-10 hours and can easily be replaced with a fresh battery once it’s drained.

Samsung has not yet revealed any release or pricing information for the Galaxy Tab Active yet.