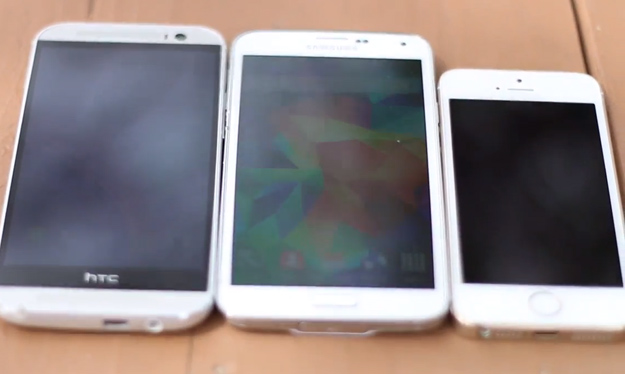 HTC’s new all-metal flagship HTC One (M8) Android phone looks and feels amazing, but does all that sturdy aluminum really stand up to a beating any better than plastic? Keaton Keller of TechSmartt took to the pavement this past week to find out. Armed with an HTC One (M8), an iPhone 5s and an unreleased Samsung Galaxy S5, Keller conducted a series of drop tests in an effort to determine which flagship smartphone is the sturdiest.

Keller conducted three drop tests in order to see how durable the latest and greatest handsets from Samsung, Apple and HTC are.

The first was a drop from pocket height, as if the user fumbled the phone while taking it out of a coat pocket. All three phones emerged almost entirely unscathed from the pocket drop test.

Keller’s second test was an ear drop, which sought to simulate a scenario where the phone slipped out of someone’s hand while on a voice call. Apple’s iPhone 5s bowed out at this point in time, suffering from a severely smashed screen when dropped from just under six feet. The One (M8) and Galaxy S5, however, came away fine.

The third test saw Keller drop the M8 and S5 from above his head — a height of more than six feet — with the screens face down. Both impacts were actually quite similar, but the results were not: Samsung’s Galaxy S5 display cracked and the phone would no longer power on.

The M8, however, did not crack and continued to function perfectly.

Of course, it’s important to note that these tests are completely unscientific and uncontrolled. The phones never land exactly the same way on the pavement, so these tests are merely anecdotal.

Oh, and since the M8 survived the 7-foot drop, Keller decided to stand on top of a park bench and drop it a fourth time from a height of about 10 feet. Did HTC’s new flagship manage to emerge victorious again? You’ll have to watch the video below to find out.