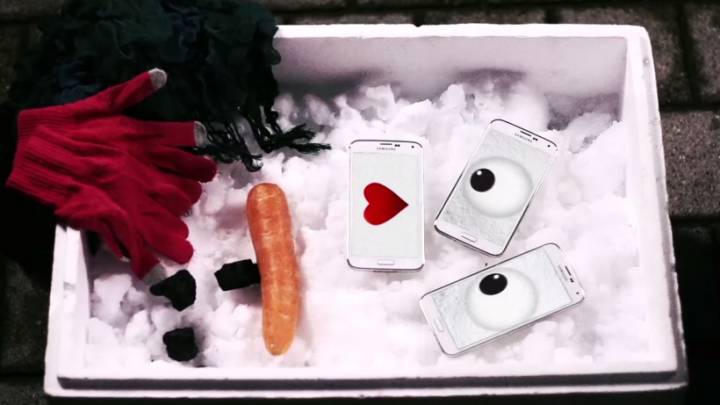 Samsung is not done promoting one of its most important handsets of the year, as the company has a new holiday-themed ad for the Galaxy S5. The new commercial focuses on one of the main features of the phone, its water resistance, which appears to be a very important ingredient when it comes to making a next-generation snowman this winter.

Samsung says on YouTube that snowman 2.0 versions can be brought to life by water-resistant Galaxy S5 handsets. All users need is “a sprinkling of snow and some Galaxy S5 snow resistant technology” to make it all happen.

The company used three Galaxy S5 units to run animations of eyes and heart, placing them inside a snowman that is otherwise normal.

Additionally, Samsung updated a couple of 20-minute long YouTube videos with animations for eyes and heart that can be played on the Galaxy S5 units after burying them in snow.

The only problem with making a snowman 2.0 version of your own is that you’ll need more than one Galaxy S5 to pull it off. However, you can at least check out Samsung’s smart snowman by following the video ad below.