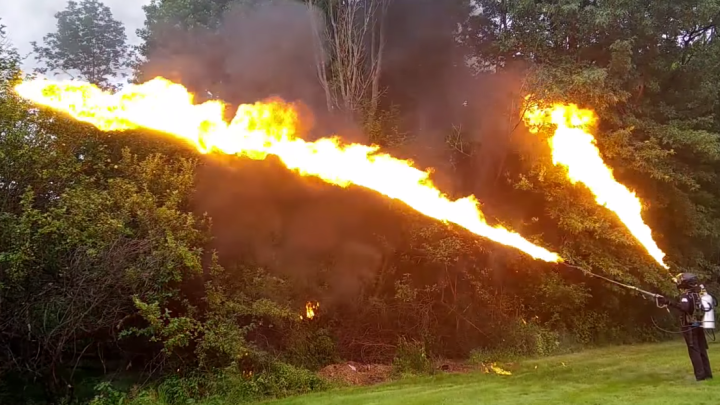 Last month, we brought you exciting news that a company called XMatter has started selling flamethrowers on the consumer market for surprisingly affordable prices. What made this even more amazing was the fact that selling such flamethrowers to Ma and Pa America is 100% legal and without restrictions in all but two states. However, Ars Technica reports that some governments have suddenly realized that giving people unrestricted access to flamethrowers that can spit fire 50 feet in the air might not be a great idea… and this revelation has only sparked more people to pick up flamethrowers while they’re still legal.

RELATED: Meet the amazing $174 gadget that lets you shoot fireballs from your wrists

“Business is skyrocketing higher than ever due to the discussion on prohibition,” Chris Byars, the CEO of flamethrower vendor Ion Productions Team, told Ars. “I’m a huge supporter of personal freedom and personal responsibility. Own whatever you like, unless you use it in a manner that is harmful to another or other’s property. We’ve received a large amount of support from police, fire, our customers, and interested parties regarding keeping them legal.”

Right now flamethrowers are completely unregulated at the federal level and are only outright banned in Maryland at the state level. In California it’s legal to own a flamethrower but only if you have a permit to own one.

All the same, we’re likely one massive outbreak of arson away from having state and local governments step in and put a stop to unfettered access to flamethrowers.

For what it’s worth, the Ion Productions Team sells its flamethrower for $900 while the aforementioned XMatter sells its X15 flamethrower for $1,600. Both of these devices are much cheaper than what you’d normally for military-grade flamethrowers that cost thousands of dollars more. In other words, we’ve probably never had to consider regulating flamethrowers before because the vast majority of us could not afford one.