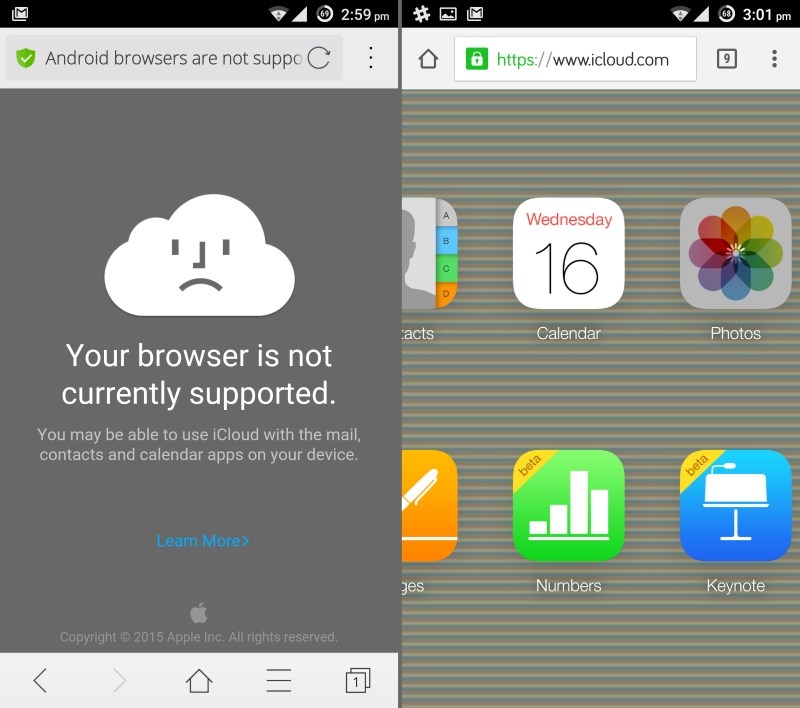 One of the worst things that can happen with your smartphone, regardless of operating system, is to lose it or have it stolen. But most devices have measures in place to help owners track them down and hopefully retrieve them, with the iPhone’s Find My iPhone app being among the first of them. However, Apple’s iCloud-based security feature isn’t Android friendly.

In fact, if you’re in a case where you need to use Apple’s iCloud to find your iPhone, you’d better stay away from Android entirely.

As it stands now, iCloud.com won’t load on Android device, no matter which browser app you choose. That means you cannot load the Find My iPhone app to locate the phone on a map. The desktop version of iCloud.com might load in Chrome on an Android device, but that won’t be much help either, because you won’t be able to scroll down to find the Find My iPhone web app you need to run – see the image above. Not even switching to landscape mode will fix the problem.

Tech blog The Next Web speculates that Apple may have restricted access to the site to prevent non-iOS users from accessing its Maps service. Whatever the case, if you need to run the app from a mobile phone, you’d better find a person who has an iOS device and not an Android phone.

Obviously, if you can get to a computer you’ll be able to use Apple’s site to locate your phone – as long as the device is still powered on.