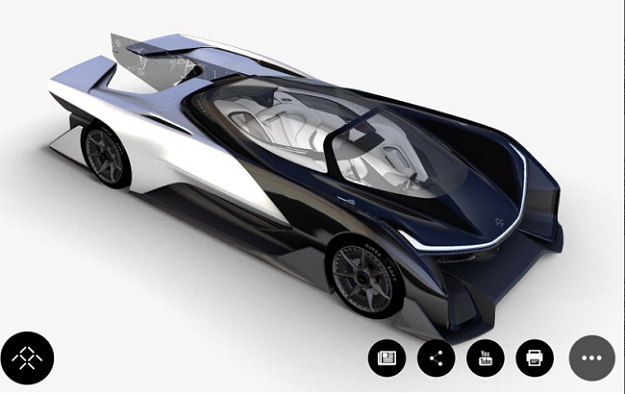 On the cusp of New Year’s Day, Faraday Future released a cryptic teaser video hyping up the unveiling of its secret electric car, a vehicle some have prematurely taken to calling a “Tesla Killer.”  While the official unveiling is slated to take place later tonight at CES, it turns out that photos of Faraday Future’s mysterious car leaked a few hours early.

Originally spotted by Jalopnik, it appears that Faraday Future inadvertently released an accompanying iOS app prematurely, thereby providing the world with photos of its alleged supercar in the process. The car is a two-seater that bears more than a slight resemblance to the Batmobile. As far as specs are concerned, the app explains that the car can go from 0-60 in less than three seconds, has more than 1000 horsepower, and comes with an “aerodynamic rear tail fin that doubles as a digital display.”

If someone crossed the Batmobile with a jet fighter, it might look a little bit like this. Note the steering wheel concept below, for instance, with what looks like a smartphone implanted right in the center.

So why is this futuristic concept car a dud? Well, International Business Times managed to confirm that the photos above do, in fact, represent what Faraday Futures plans to showcase tonight. Additionally, they managed to gather up a few more details about the car.

A reliable source familiar with Faraday Future’s plans told IBTimes UK that, although the car will be shown off at CES, it is not functional and does not drive. This is often the case for such extreme concept cars, which are built as a demonstration of what a company is capable of; design cues from this car may well appear in FF’s production cars, but this one will not be sold to consumers.

While this may be par for the course for extreme concept cars, the amount of hype surrounding Farday Future led a lot of people to expect a whole lot more from their upcoming announcement. The report further adds that the ultimate production car Faraday Future hopes to release will look nothing like the concept it will show off tonight.

Also of note is that the Faraday Future’s top battery engineer left the company just last week, suggesting that the company, backed by an ambitious Chinese multi-billionaire, is still a long ways away from truly competing with Tesla in any serious manner.

A short video compiled from the company’s iOS app was posted earlier today by Twitter user superannuation. Check it out below.