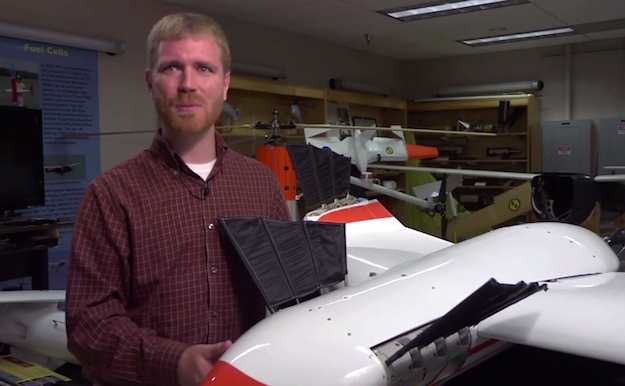 Always on the lookout for new and creative ways to gather information in hard to reach locations, the United States Naval Research Laboratory (USNRL) has quietly been developing a drone that can not only fly through the air, but also swim underwater.

Called “Flimmer”, the device has been under development for about two years, with research being spearheaded by Dan Edwards who works in the Vehicle Research and Tactical Electronic Warfare section within the USNRL. The Vehicle Research Section, according to the Navy, is “dedicated to advancing the state-of-the-art in unmanned systems technology.”

And Flimmer, if anything, seems to fit that bill.

Now the way Flimmer works is seemingly simple enough to belie its true complexity. The device takes off like any other airborne drone and flies off into the distance. Next, the drone splashes down at a pre-determined location, submerges itself under water where it then begins to swim to a target location. By air, Flimmer can reach speeds of 57 MPH. In the water, Flimmer travels at about 11 MPH.

Curious about what this head scratching contraption looks like and how it operates? Well not to fear, the USNRL put out a video of Flimmer in action earlier this month.

As for the purpose of Flimmer, some possible use-cases include detecting certain chemicals in bodies of water, finding the source of oil spills, and perhaps assist in undersea warfare missions.

The Navy writes the following of Flimmer:

NRL is merging two separate research areas — unmanned undersea vehicles (UUVs) and unmanned air vehicles (UAVs) — to significantly improve tactical availability of UUVs in time critical situations. Common across the services, autonomous vehicles are being seen as an effective projection of force, both above and below the water’s surface. Unlike an air-deployed Sonobuoy, ongoing research into novel bio-inspired UUV finned propulsion has potential benefits for autonomous motion beyond the insertion point. This combination of an airplane mode for UUV insertion is the thrust of the Flimmer program.

Interestingly enough, this isn’t the only fascinating drone project the Naval Research Laboratory is working on. Just a few months back, USNRL scientists showed off a tiny spy drone it calls the “Cicada.”

Conveniently, Cicada stands for “Covert Autonomous Disposable Aircraft” and these drones, which are practically silent, can reach a top speed of 46MPH and, from a distance, look like nothing more than birds flying through the sky. The Cicada can be used to send back information pertaining to weather or even troop movements. Of note, the Cicada isn’t meant to return home, but rather dies when it’s battery source runs out.

DefenseNews highlighted the project this past May:

The “micro air vehicle” is named after the insect that inspired its invention, the Cicada, which spends years underground before appearing in great swarms, reproducing and then dropping to the ground dead.

“The idea was why can’t we make UAVs (unmanned aerial vehicles) that have the same sort of profile,” Aaron Kahn of the Naval Research Laboratory told AFP.

“We will put so many out there, it will be impossible for the enemy to pick them all up.”

The photo below illustrate how small the Cicada vehicle is.