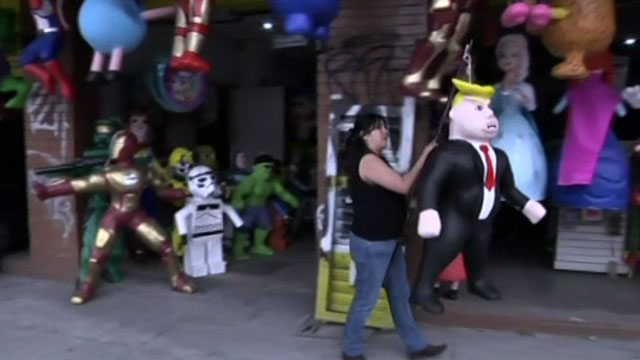 We don’t condone violence, but the thought of beating presidential hopeful and all-around awful person Donald Trump with a stick isn’t terribly unappealing. No, you should not find the real Donald Trump and beat him with a stick. If you happen to find yourself near Alicia Lopez Fernandez De Lara’s shop in Mexico City, Mexico, however, we highly recommend picking up one of De Lara’s Donald Trump pinatas and unloading some of that pent-up rage.

Fox NY reports that De Lara’s shop recently began selling the Trump pinatas in response to the Republican presidential candidate’s recent comments on Mexican immigration. According to tradition, pinatas represent evil and must be smashed open to release the good trapped within.

We’re not sure there’s any good trapped within the real Donald Trump, but there are certainly plenty of people who wouldn’t mind finding out. That would be wrong and illegal though, while taking a few swings at Pinata Trump is just fine.

The pinata features a sharp-looking suit as well as Donald’s trademark ridiculous haircut. To be perfectly frank, the Donald Trump pinata is probably more electable than the actual Donald Trump.