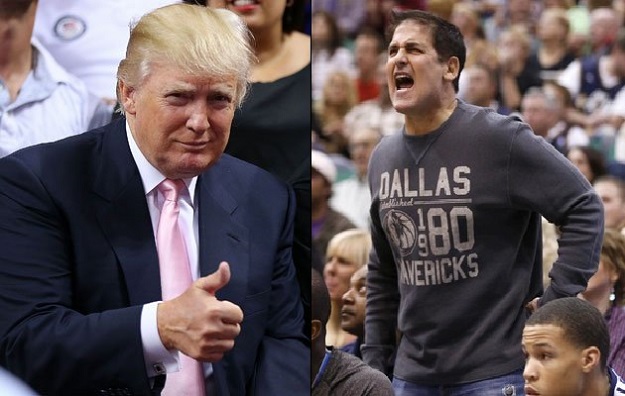 With Donald Trump now running for president, the man with the hair that just won’t quit has been forced to open up about his finances. And, well, Trump is one wealthy son of a gun. Just last week, Trump boasted that he’s worth “in excess of ten billion dollars” and that he made $362 million in 2014 alone.

Not everyone, however, is taking Trump’s ostentatious remarks at face value.

Commenting on Trump and his alleged billions, Dallas Mavericks owner Mark Cuban took to his app Cyberdust to slam Trump. Notably, the two have been mildly feuding with each other for years now.

In short, Cuban writes that Trump’s wealth is a “play number” because Trump doesn’t actually have much cash on hand. Rather, much of Trump’s wealth, Cuban argues, comes in the form of assets that can’t quickly be turned into usable cash.

Pertinent portions of Cuban’s entertaining anti-Trump screed can be read below.

Hey, Dusters, let’s talk Trump. So much to say that it can’t happen in one blast. But the first place to start is his net worth.

He has been bragging that he is worth north of ten billion dollars.

Let’s say you own a painting that gets appraised at 10 billion dollars. That gives you a net worth of 10 billion. But that does not mean you have a lot of cash

In fact it’s possible to be worth billions, but not be able to pay your rent

How much cash does Donald have? We don’t know for sure. But we do know whatever cash he has, post his several corporate bankruptcies, he hates to spend it

After all who feels the need to donate money to a guy who says he is worth 10 billion dollars?

It’s the Trump Conundrum. He is a Paper Tiger.

It’s very possible that he doesn’t have the cash himself and has bragged himself into a position where he can’t afford the cash it takes to run for President !