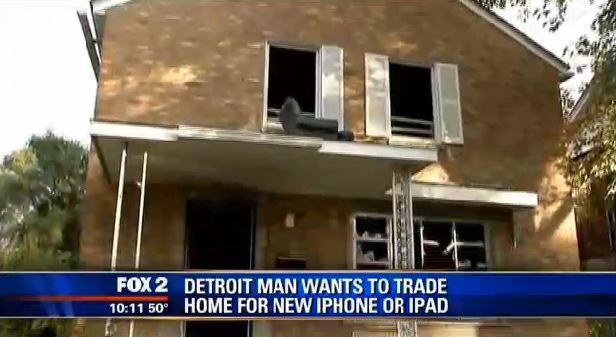 It’s no secret the demand for the iPhone 6 is huge, but what would you be willing to trade to get one if you don’t have the funds to buy one? Over in Detroit, one homeowner who can’t get rid of his house and is willing to trade it for an iPhone 6 Plus.

RELATED: Buying a used iPhone? Here’s how to find out if it’s stolen first

The Detroit house was originally listed for a clearance rack price of $5,000, and when that got no bites, it dropped to $3,000. The home, a three-bedroom, 1.5 bathroom brick colonial on Detroit’s east side, has yet to find a buyer.

Real estate agent Larry Else told local channel Fox 2, “My client is overseas, and he told me he would be willing to trade the property for an iPhone 6. It sounds to me like he wants the premium [6 Plus] version, but I’m sure he’s willing to negotiate.”

If he can’t get the iPhone 6 Plus, he will be willing to settle for just the regular iPhone 6 or a 32-gigabyte iPad.

There’s also another little detail that comes with the trading an iPhone 6 for anyone who decides to trade an iPhone for this fixer-upper.

“We’d be willing to do a deal,” Else old Fox 2. “They would be able to get it on quick claim but eventually they would have to pay the back taxes. He might be willing to take anything maybe an Android.”

If you aren’t willing to give up your new iPhone 6, an Android phone to trade for the house could be put on the bargaining table. Others find the idea of trading any type of phone to be ridiculous

“That house isn’t worth a Metro, let alone an iPhone 6,” explained one Detroit woman in the video below, who implied that the house just needed to be torn down.