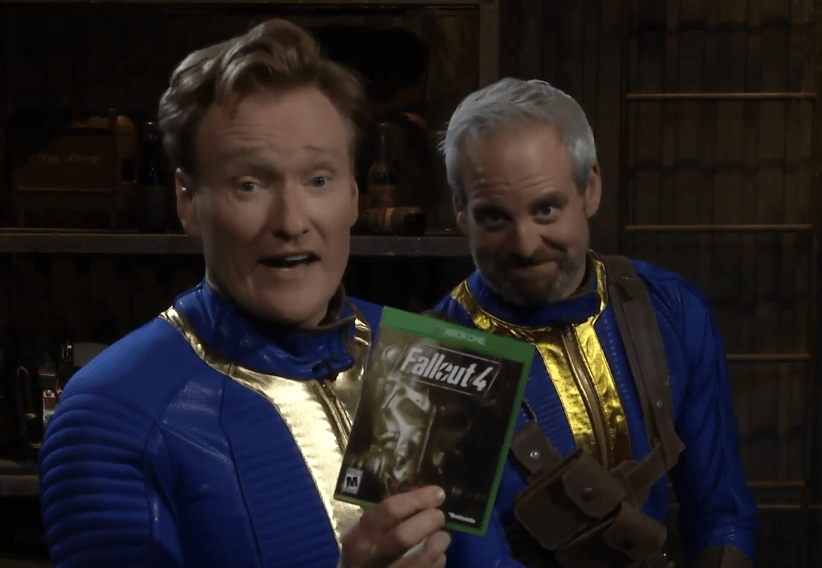 Anyone who’s ever watch one of Conan O’Brien’s “Clueless Gamer” segments knows that he often spends a lot of time trying to pick up female non-player characters in the game. While he successfully scored during his time playing The Witcher 3 earlier this year, his time playing Fallout 4 this week was a much more sexually frustrating (although still highly entertaining) affair.

Conan plays the game while wearing one of the truly ridiculous Vault 111 jumpsuits that we see in the game. He’s also wearing a full Pip-Boy device that he describes as what the Apple Watch would look like if it were designed by Microsoft.

His first goal in the game is to try to initiate sex with his character’s wife but she tells him that he has to change their new baby’s diapers instead. He is not happy about this and shouts at the camera that a new baby means “NO SEX EVER AGAIN”:

Once his character makes a trek out into the post-apocalyptic wasteland, he feels a fresh ray of optimism because his player character has a “toned” ass even if it’s placed inside a ridiculous jumpsuit:

He then makes his first of many critical errors in the game by promptly jumping off a cliff and dying:

Eventually, he makes his way to Diamond City, which is humanity’s main hub in post-apocalyptic Boston. He immediately tries to pick up a woman sitting at the bar and is promptly rejected as she walks away without saying anything:

He then tries a more blatant approach of walking in front of another woman and showing off his ass to her:

Once again, it fails.

This isn’t all Conan does while playing the game, of course. He also kills lots of ghouls, meets up with a friendly dog companion and plays a computer hacking mini-game that he absolutely hates.

Check out the full segment below.