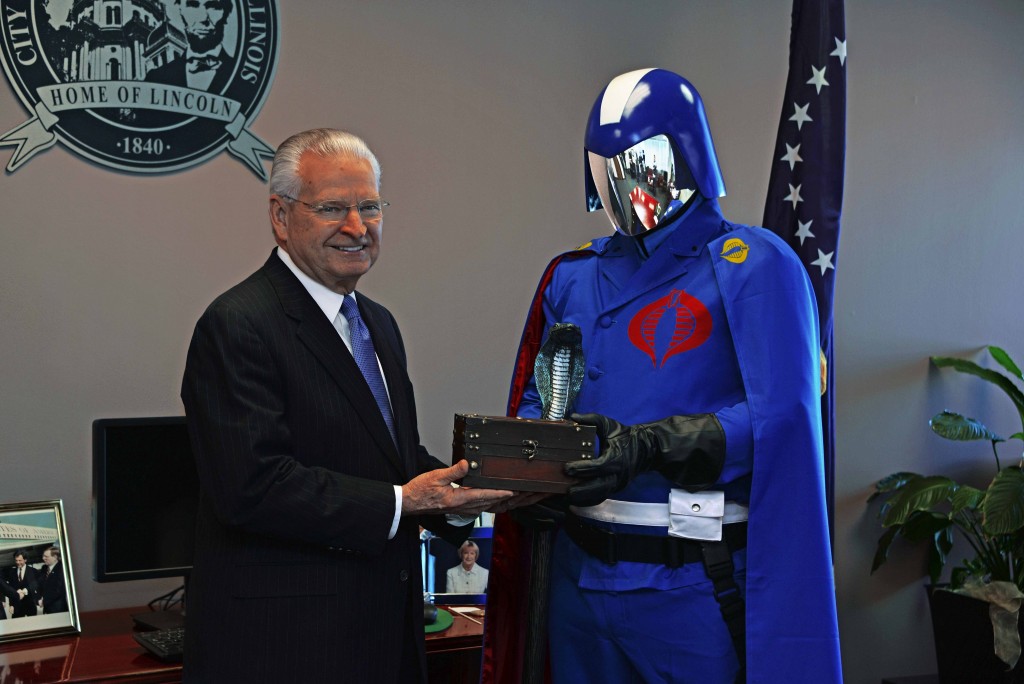 There are days in the life of every politician when they have to look at their daily schedules and say to themselves, “Is all the power I have really worth this?” We imagine that J. Michael Houston, the mayor of Springfield, Illinois, had such a moment on Wednesday when he handed over the keys to his city to a man dressed up in a Cobra Commander outfit, as pictured above.

Why is the mayor interacting with one of the most notorious cartoon villains of the ’80s, you ask? According to GI Joe-related blog Generals Joe, the Commander was in town ahead of the G.I. Joe Collectors’ Convention that’s slated to take place starting on April 9th. The blog also says that the Commander gave a rousing speech in accepting the key to the city and  urged people to sign up for his evil cause.

“Springfielders near and far, I accept your Mayor’s generous gift,” the fictitious villain declared. “And let it be known that I too bring a gift for every man, woman and child of this city that is so near and dear to my heart; an invitation to join with me. Join Cobra!”

While you might think the citizens of Springfield should be fearful of the Commander’s presence, we should also recall that he runs what has to be the single least effective terrorist organization in the world. Because think about it: The goal of a terrorist organization is to enact political change by carrying out deadly attacks on civilians. In your entire time watching GI Joe, have you ever seen Cobra successfully kill even one civilian?

In other words, if you’re going to come under assault from an ’80s bad guy, you’re better off having it be someone completely inept like Cobra Commander, who might be even more incompetent than Dr. Claw and Skeletor.

Generals Joe is promising us video footage of the Commander in Springfield, which we’ll post below as soon as it’s online.