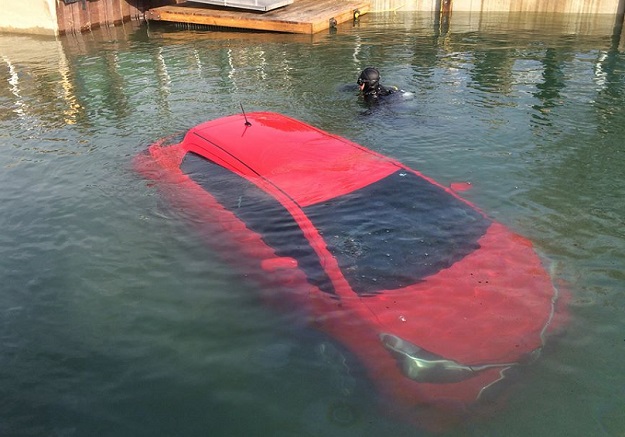 We’ve seen the “GPS directions gone awry” scenario play out on TV shows any number of times, but perhaps the most well-known example comes from an old episode of The Office where Michael and Dwight both ignore their common-sense instincts and instead blindly drive a car into a lake.

Recently, and rather unfortunately, a Canadian woman on the road had her own Michael Scott moment when, in the midst of a rainstorm and accompanying fog with low visibility, she followed her GPS’s driving directions — only to find herself in the middle of a freezing cold lake in Ontario.

Thankfully, the woman reacted quickly and rolled down her window whereupon she exited the vehicle and swam to safely. As Mythbusters once taught us, a sinking car can become dangerously impossible to exit if prompt action is not taken.

An onlooker, Andrea Vincze, who photographed the car as it was towed out of the bay, told ABC News the boat ramp leading into the water is “pretty wide” and could easily be mistaken for a street

An accompanying report from the Toronto Sun relays that the woman managed to escape with no injuries or even the slightest hint of hypothermia. It’s worth noting that alcohol was not a factor in the mishap, though it’s too early to tell if we can just as easily let Apple Maps off the hook.

Interestingly enough, faulty GPS directions over the years have resulted in absent-minded drivers getting themselves into all sorts of wacky and bizarre situations over the years, including one instance where a car drove right into a house.

And lastly, the aforementioned Office clip.