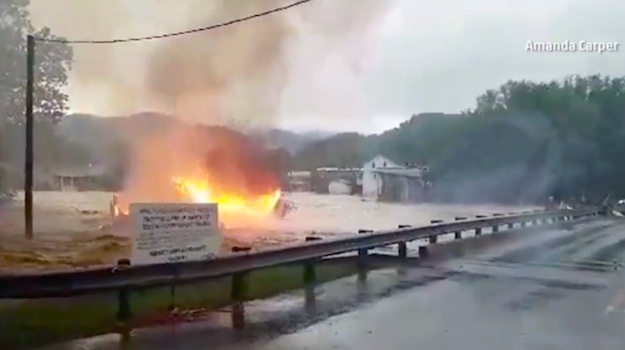 About two weeks ago, towns in West Virginia were caught up in deadly floods that saw some areas receive as many as 9 inches of rain in a single 24-hour period. In one particularly dramatic and harrowing scene captured by a resident in White Sulphur Springs, West Virginia, a burning house can be seen floating down a creek.

According to a report from The Weather Channel, the house was “swept away by flood waters after being struck by lightning.” From what we can gather, no one was still in the house at the time that this footage was taped.

Of course, others weren’t so lucky as the flood would eventually cause a total of 23 deaths. All told, an estimated 500 homes were severely damaged by the flood, an event which prompted West Virginia Governor Earl Ray Tomblin to declare a state of emergency for 80% of the state’s counties.

Since the flooding, West Virginians are still trying to cope and recover from what is reportedly the deadliest flash flood in the United States in the last six years.

Lastly, country singer Brad Paisley, a West Virginia native, launched a GoFundMe campaign for West Virginia Flood Relief, an initiative that has already managed to raise more than half a million dollars for various relief efforts. Over the last six days alone, more than 5,400 individuals have donated.