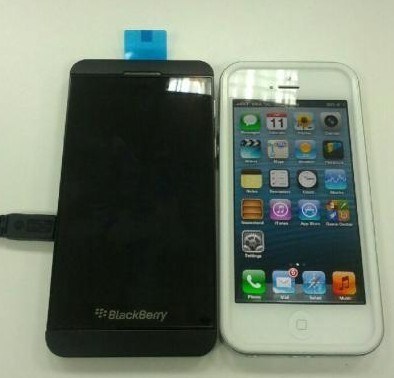 Research in Motion (RIMM) will formally introduce BlackBerry 10 to the mobile world on January 30th and is said to be launching the first devices running the new operating system shortly thereafter. We have seen the company’s newest handset, known under the codename BlackBerry London or L-Series, in a variety of leaked images throughout the past year, however the latest leak provides additional details that show off the smartphone’s overall size. India-based BlackBerry fan site BBin on Wednesday posted an image of the London next to an iPhone 5. It is clear from the image that RIM’s device is slightly larger than Apple’s (AAPL) and has a bigger display, although is isn’t nearly as big as many Android smartphones on the market right now. The London is rumored to be equipped with a 4.2-inch 1280 x 768 pixel resolution display and include a dual-core processor, 1GB of RAM, 16GB of internal storage, a microSD slot, and an 8-megapixel rear camera.