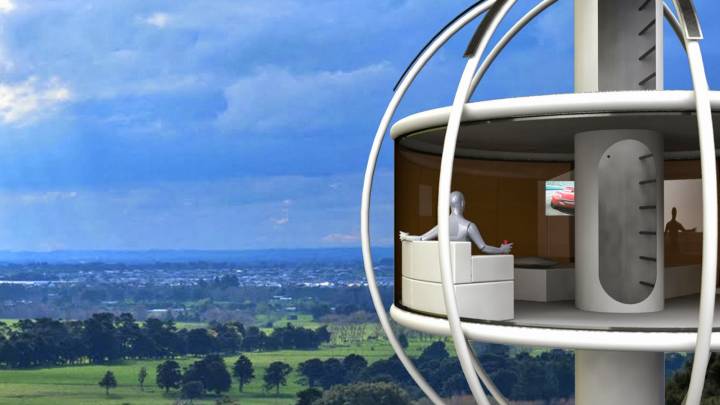 Every man dreams of having his own Fortress of Solitude where he can drink beer, play video games and watch football in peace without the distractions of family life. Engineer Jono Williams, however, has taken things to crazy new heights with his Skysphere project that he’s spent 3,000 hours and $50,000 building so far.

As you can see in the photo at the top of the page, the Skysphere is a large sphere that overlooks the beautiful New Zealand countryside. Inside of the sphere, you’ll find several amenities that are essential for any high-tech man cave, including:

The entire sphere is controlled with Williams’ Android phone via a special remote control app he designed. He gets into and out of it using a ladder in the central shaft holding up the sphere. He also keeps it secure by having a fingerprint scanner at the entry door that makes sure only authorized personnel enter it. And finally, the entire sphere is 100% solar powered, which obviously is something the works better in New Zealand than it would in, say, Alaska.

There’s a downside to everything, though, and the sphere still lacks a proper bathroom, which means that you’ll have to climb down the ladder and relieve yourself in the wilderness while inside the Skysphere.

To check out even more pictures of this incredible man cave, you can check out the official Skysphere webpage here.