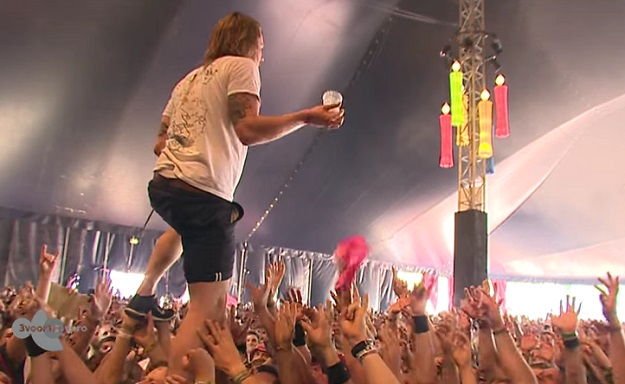 In today’s age of viral video, it’s not too often that we come across something that’s truly jaw dropping. This is that something. The following video features singer David Achter de Molen, from the Dutch band John Coffey, crowd-walking during a concert when, out of the blue, someone slings a full cup of beer in his direction. Miraculuosly, he catches the cup right-side up, chugs it, and tosses it aside like it ain’t no thang.

The only question that matters here is whether or not the throw or the catch was more impressive.

A video making the rounds on Reddit, YouTube, Facebook, and beyond is so incredible that it makes one believe in the seemingly impossible. In the video, singer David Achter de Molen of the band called John Coffey can be seen crowd-walking, and then catching what one hopes is amber-colored beer in a cup. Instead of getting angry, David drinks from the cup, tosses it, and keeps the party going. While some assume the beer is being thrown at the singer in anger by a member of the crowd, a headline on the Belgian HLN website seems to indicate the singer ordered the beer that was thrown at him.

Well, David Achter de Mole just might be the coolest student of Applied Psychology and lead singer in the world if that catch was real. According to the YouTube description of the various copies of the video, it purportedly isn’t a hoax or the work of some Final Cut Pro or Adobe Premiere video editing magic.

“At Pinkpop Festival 2015 in Holland, John Coffey lead singer David Achter de Molen catches a beer, thrown from the crowd, while crowdwalking, and drinks it!”

As reported by the Belgian website HLN, David’s catch of the beer was real. That site talks about the shared experience of being at a festival beneath the blazing sun, only wishing for a cold beer. Due to the festival crowds all wanting the same cold beer, it seems an impossible feat. But that Pinkpop performer got his swig of beer that was either hurled at him out of love or disgust. Either way, he got his beer. Hopefully, that was beer. The commenters on YouTube are saying that it could’ve been urine for all David knew before he took swill.