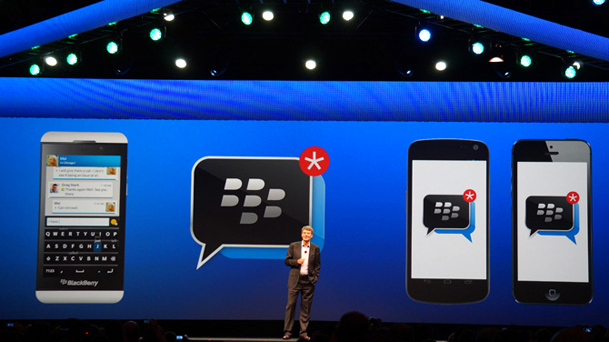 BlackBerry just announced that it has added 20 million iOS and Android users to its BBM messaging service in one week. This rockets BBM’s total monthly active user base to 80 million. How should we view these numbers? One way to approach them is to make some comparisons: It took Path 16 months to get to 10 million users after the revamped service was launched in the beginning of 2012. Kik took two years to hit 30 million users; Viber took two years to hit 50 million. It took LINE one year to get to 40 million users — and that was considered a stellar success back in 2012.

So obviously, getting to 20 million users in a week is phenomenal, and 80 million MAUs is a big deal.

In reality though, the value of BBM users on BlackBerry phones is highly questionable. Selling them apps, for example, is far less lucrative than selling apps to iPhone or Android phone users. But on the two most popular smartphone ecosystems, grabbing 20 million messaging app users in a week gives BBM a legitimate shot at becoming a substantial marketing and distribution platform.

What is important to remember here is that LINE launched its game promotion network when it had just 45 million registered users. The service went on to gross more than $100 million per quarter one year later. BBM on Android and the iPhone is now half way to the number of registered users LINE possessed when it kicked off its game marketing system.

There are plenty of BBM critics carping about the flaws and shortcomings of the service. What they do not seem to grasp is that the app is displaying fantastically strong legs. On its ninth day on the market, BBM is still a top-5 app in 101 countries. It is still holding onto the No. 2 position in the brutally competitive U.S. and U.K. iPhone app markets. Let’s remember that the insanely popular Snapchat service only spent two consecutive days in the top-2 of the free iPhone download chart in the U.S.

It is very, very hard to cling to these top slots for more than a couple of days.

BBM is demonstrating spectacular geographic variety, holding onto No. 1 positions in India, Turkey, Portugal, Spain, Israel, Egypt, Mexico, Argentina, Colombia, Thailand, Philippines, Indonesia, Nigeria and South Africa. It is a deep reach across Latin America, Africa, Middle East and South-East Asia. This wide spectrum of appeal across continents gives BBM a much broader base to build on than some of the most popular apps can currently muster; KakaoTalk, for example, is still notably narrow in its geographic appeal.

BBM seems to be on its way to hitting between 40 million and 50 million iOS/Android users by Christmas. This would place the messaging service where LINE was one year after its launch. Much now rides on how savvy BlackBerry is in turning this user base into a target for marketing and app distribution services. BlackBerry needs to be able to morph into a dynamic advertising company and that is an epic challenge.