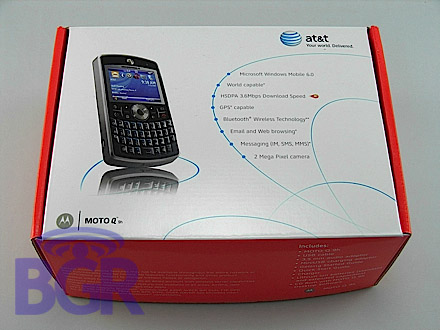 What do we have here, guys? You all waited for it, you might even have shed blood for it, but it’s finally here in the flesh, and we’re super impressed! For starters, the early unit we had way back is a little different, and the changes on the new production unit are for the better. Let’s take the keyboard, for instance…before it was a rubberized texture, and while it was cool, it actually got in the way of speed-typing. The AT&T version has switched to completely plastic keys and we can bang out emails faster that you can say, “when can I get one.” To answer that, we’re hearing the 1st of November will be the official launch date. We were a little disappointed that BlackBerry Connect wasn’t made available on the device like it was with the AT&T Tilt, but we guess it will come sooner or later. How about the speakers? I think it might be one of the loudest and clearest speakers on any  mobile device, it is that good! Another welcome addition is built-in GPS. Something that wasn’t even on our earlier at all, and it works very well. From the Pantech Duo, to the AT&T Tilt, to the Motorola Q9h, and the upcoming Blackjack II, you shouldn’t have any problem finding a Windows Mobile device on AT&T. Pricing wasn’t revealed to us just yet by our source, but we’ll update you as soon we know! Want to check out the pictures? Sure you do!

Click on over to our AT&T Motorola Q9h Unboxing gallery!