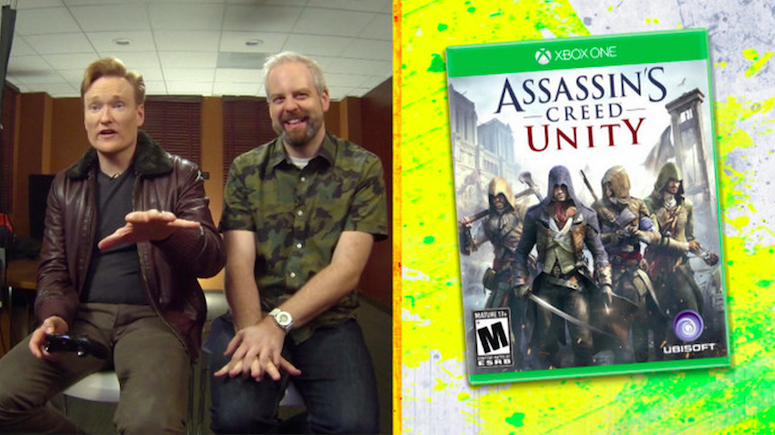 In the midst of a busy holiday season for game releases, there are a few staple franchises that being updated for the new generation of consoles. One of them is Assassin’s Creed Unity, and Conan O’Brien is back in the saddle as the Clueless Gamer to review the first current-gen exclusive of the popular open-world series.

In Unity, you play the part of Arno, an orphan who finds himself mixed up in a centuries-long struggle between the Assassins and the Templar. It’s the most visually impressive game in the history of the series, something that Conan references several times throughout his time with the game. It’s also incredibly violent, another aspect that Conan seems to appreciate as he slits the throats of his enemies.

As you might expect (if you’ve ever seen Conan before), Conan spends a great deal of time poking fun at the game’s setting: the French Revolution. Many of the characters inexplicably have British accents, which of course contributes to Conan’s final score of “blimey guv’nah.”

You can watch the full video below, and be sure to check out Best Buy’s deal on the Assassin’s Creed Xbox One Bundle if you’re thinking of picking it up this Black Friday.