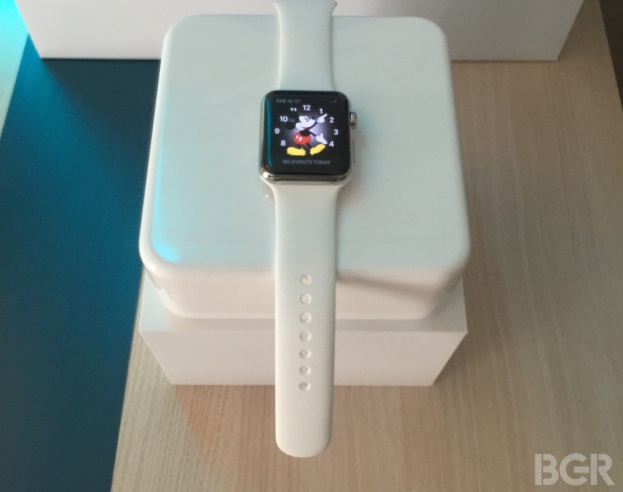 After spending a good amount of time with my new Apple Watch, I have not been able to find the one defining feature that would make it a must-have device for everyone. In fact, I couldn’t even explain to some of my friends why it made sense for me to buy the device. All that said, I am starting to see what this tiny device could bring me: More free time.

DON’T MISS: How have I gone so long without knowing about this secret Google Maps trick?

The more I figure out how to use the Apple Watch, the more I’ll get used to it and its features, the more I should become less prone to check the iPhone on a ridiculously constant basis. Plus, the device just looks good.

Let’s start with the beginning. Heading into that gold Apple Watch hands-on I knew everything there was to know about it, since I covered the device for months. But I lacked the physical experience with it. And once you put it on, you get it. The Apple Watch is like nothing done before and no current smartwatch is on the same level.

The Watch feels great on my hand, it’s not heavy, and it’s not getting in the way. It just fits, especially if you keep it tight enough. The screen is gorgeous, no matter what model you choose, and you’ll notice it especially when you start playing with Apple’s custom watch faces.

The detail is incredible, and so is the feeling of having your fingers slide across it. Same goes for the Digital Crown, one component of the device that pleasantly surprised me. It’s just so easy to operate, and it feels so familiar, though it’ll take some time until you grow accustomed to using it, so don’t be alarmed if it doesn’t immediately feel natural.

After buying mine, a 42mm Stainless Steel Apple Watch with a white Sport band, I’m even more amazed with the thing. Both the body and the strap feel great and I’m hardly going to notice them once I get used to wearing a watch on a regular basis – something I haven’t done in a decade or so.

As for setting it up, that was a walk in the park and I just love how the iPhone helped me handle it all. Just use the Apple Watch app on your iPhone, which aligns the device to a pattern on the screen with some help of the camera and the setup starts. You get to customize a few settings, including the hand you’re going to wear it on and whether you want the device to lock all the time.

The whole system is smart enough that the Watch will already recognize whether you have apps with Apple Watch support on your iPhone, and it will transfer them automatically if you so desire. Furthermore, going into certain apps will make you realize that the Watch is already capable of providing a quick look at the content and data you have on the iPhone. You get call logs, favorite contacts, music playlists, weather preferences, timezone time settings, and many others right on the tiny display. The information is right there for the taking. From the start, it saves you time by offering you quick access at the things you already know you have either set up or stored on a different device

And while you do all that – getting used to the menus, the new gestures and the buttons – you start receiving notifications out of the blue. Yes, that’s an iMessage coming in, and that’s how a vibrating alert feels like. And that sound is the Watch telling me that I need to stand, but the Watch has no idea how much standing I already did for it so I’ll just pass up on this prompt right now.

Speaking about battery life, the device had a 73% charge when I unboxed it, and five hours later it was at 52% after I played with it for quite a bit. But I’m far from really putting it through its paces.

There are things I don’t like about the Watch after this brief experience, though some will be fixed in time. The Sport band can feel too tight at times, and it might feel too sweaty. Also, since it’s white, no matter how much I’ll clean it, I expect it to show wear and tear marks faster than other colors.

Furthermore, the M/L band feels too big, and I immediately changed it with the smaller one, and the clasps mechanism takes a while to get used to. But boy, it’s so easy to switch bands once you have spares. Not to mention that wearing the Watch and typing at a keyboard all day long might take some adjusting too.

On the software side, I did notice the UI is smooth and responsive, though there will be the occasional accidental regular and Force touches that go awry, and the expected pauses in interaction as you figure out what you have to do next based on what you know about the device.

But overall, I think Apple has a game-changing piece of technology here, one that’s only held back by the current limitations Apple is fighting with: Namely, the limits of current smartwatch batteries.

That’s why the future of the wearable gadgets will be even more exciting. We’re just getting started with the Apple Watch and future smartwatches will only get better with time, especially once batteries get better.

In this preview, I only tackled the things I encountered in the few short hours of using the device, but a more detailed review will follow in the coming days that will look at various other aspects of the Watch, including details about that complex Apple Watch iPhone application.