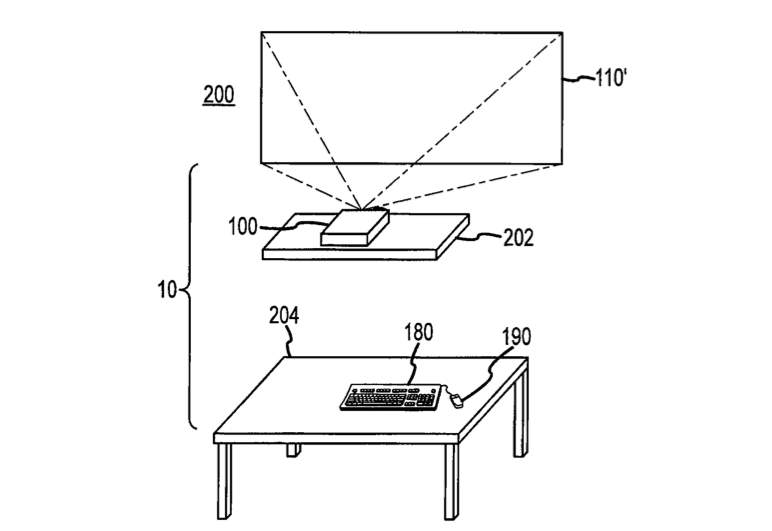 With all the talk of an , a recent patent awarded to to the company suggests it may have even more ambitious plans for the living room in mind. Per Patently Apple, it seems that Apple has been granted a patent for a “desk-free” computer that relies on an intelligent projector that is packed with an accelerometer, ambient light sensor, and depth sensor. Combined, these sensors can tell the projector how and where to project images and thus create a computer that would also be nearly completely wire-free. The patent proposes using inductive wireless charging or batteries to power the various parts of the computer.

This could in theory be an incredibly portable — yet powerful — computer. Just direct the projector toward any wall and set down the keyboard and mouse. The projector would then intelligently determine the correct orientation, color balance, and brightness for the projection. Since everything is wireless, this computer would be easy to bring on vacation or to different rooms in the house.

Even so, it will likely take a long time before this particular invention sees the light of day, if it ever does. Apple, like most large tech companies, patents as many ideas as it can come up with. However, with the ever-present rumors that Apple has bigger plans for the living room than its device, one can’t help but wonder if this “desk-free” computer could be a part of its plans some day.

One of the biggest challenges of a more advanced would be how users control it: Right now has a simple controller with three buttons and a directional pad. While easy to use, it is also limiting.

If Apple wanted to enter the gaming arena or anything similar, it would need to develop either a more advanced controller or a new mode of interaction. While this patent does not provide this, one could imagine this “desk-free” computer being combined with advanced sensors from recently acquired PrimeSense to create a very interesting living room computing experience.