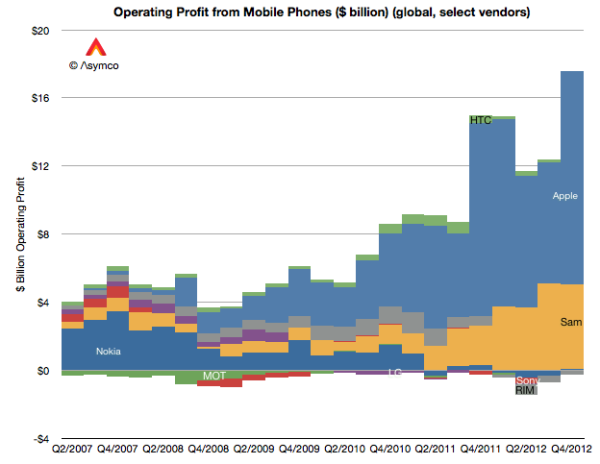 Woe to any company not named Apple (AAPL) or Samsung (005930) that tries to make money selling mobile phones these days. As previous research has shown, Apple and Samsung have completely dominated profits generated from selling mobile phones and the two companies now account for an incredible 103% of the profits created by the industry. Horace Dediu and the team at Asymco have now put together a handy chart that shows us just how much Apple and Samsung have come to completely own the mobile industry: As you can see from the picture above, the mobile industry’s two titans have completely crowded out their competitors as rivals BlackBerry (BBRY), LG (066570) and Nokia (NOK) are barely breaking even if they’re lucky. As recently as 2009, all three of those companies, as well as Apple and Samsung, were turning profits selling mobile devices but now it seems as though the market has turned into something of a duopoly when it comes to profitability.