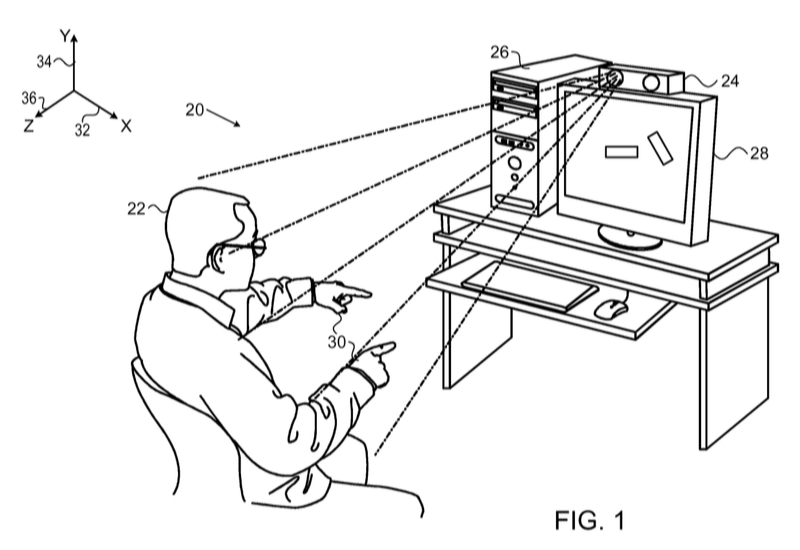 One of the highlights of the 2002 movie Minority Report movie starring Tom Cruise is the impressive 3D gesture-based computer interface the cops use to dig for clues that help them solve murders before they happen. For years, some people have been waiting for tech companies to be able to actually create such a method of interacting with computers, and various game console makers have are already selling hardware and software that can interpret your gestures in real-time.

But Apple may be looking to bring this particular UI to computers and TVs at some point in the future, according to a patent awarded on Tuesday to Apple, first seen by AppleInsider.

Titled “Three dimensional user interface session control,” U.S. Patent No. 8,933,876 details means through which a computer user could interact with objects on a screen from the distance, by simply moving his or her hands and manipulating objects in mid-air.

The system would make use of a camera that could detect both motion and depth, and trigger appropriate actions on the computer. Even though the system may not offer at first the same complexity shown in the Minority Report computer concept, the patent does describe a variety of gestures the user could make to interact with the software without necessarily sitting in front of the screen.

Apple purchased PrimeSense in late 2013, the company that created the first motion tracking device used in Microsoft’s Kinect, in a deal worth as much as $360 million. Apple is expected to include motion-sensing technology, perhaps similar to the tech described in the patent, in future Mac and products.

The full patent is available at the source link below.