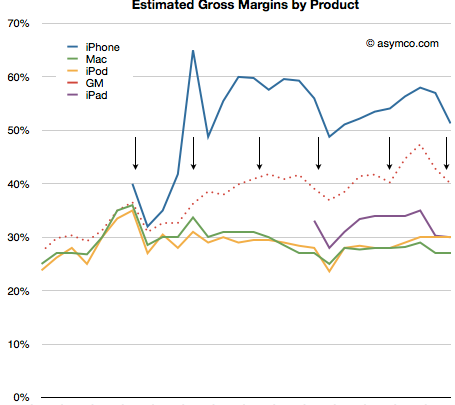 How did Apple (AAPL) become the world’s most profitable company? It turns out that a lot of it has to do with the iPhone, obviously. Asymco has posted some fresh analysis on its blog of Apple products’ gross margins showing that the iPhone produces far and away the highest margins for the company. In fact, the iPhone is the only Apple product to consistently produce margins in excess of 50%, whereas iPads, Macs and iPods typically produce margins in the 25% to 35% range. Asymco goes on to describe the iPhone as a “profit monster” that has helped put Apple’s “gross margins and its operating margins… on a consistent upward slope since early 2006.”