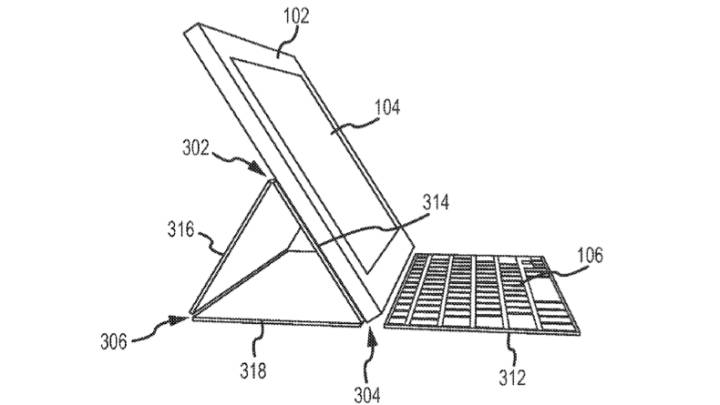 A future Apple Smart Cover protective case for the iPad may come with a built-in, detachable ultra-thin keyboard that may also have multitouch capabilities, a new patent application discovered by AppleInsider reveals.

The new invention – filed in September 2012 and titled simply “Cover for Electronic Device” – details a new type of cover that can protect both the front and rear sides of the iPad, while also housing a full keyboard, which in turn is also protected by the case when not in use.

The cover features four sides connected with hinges that allow ample movement, providing a way to use it as a dock that could hold the iPad in landscape position in those cases when the user would want to use the keyboard. The keyboard can hook up to the iPad via a wired or wireless connection, the patent says, and would support both typing and multitouch gestures.

Magnets will keep the cover closed either on the front or back, and turn off the keyboard, and could keep the whole cover attached to the iPad, although Apple is considering other means of holding the tablet in place including “buttons, snaps, buckles, Velcro, or other types of mechanical closures.”

Microsoft has already launched a variety of keyboard covers for its Surface tablets, which also support touch input and can be used as screen protectors. The Surface’s built-in stand and attachable keyboard cover are some of the arguments Microsoft uses in its anti-iPad ad campaigns. However, Apple’s proposed keyboard would not be as big as Microsoft’s keyboard covers and would take up only half of the screen.

Various images from the patent showing how this smart cover concept would work with a tablet follow below.