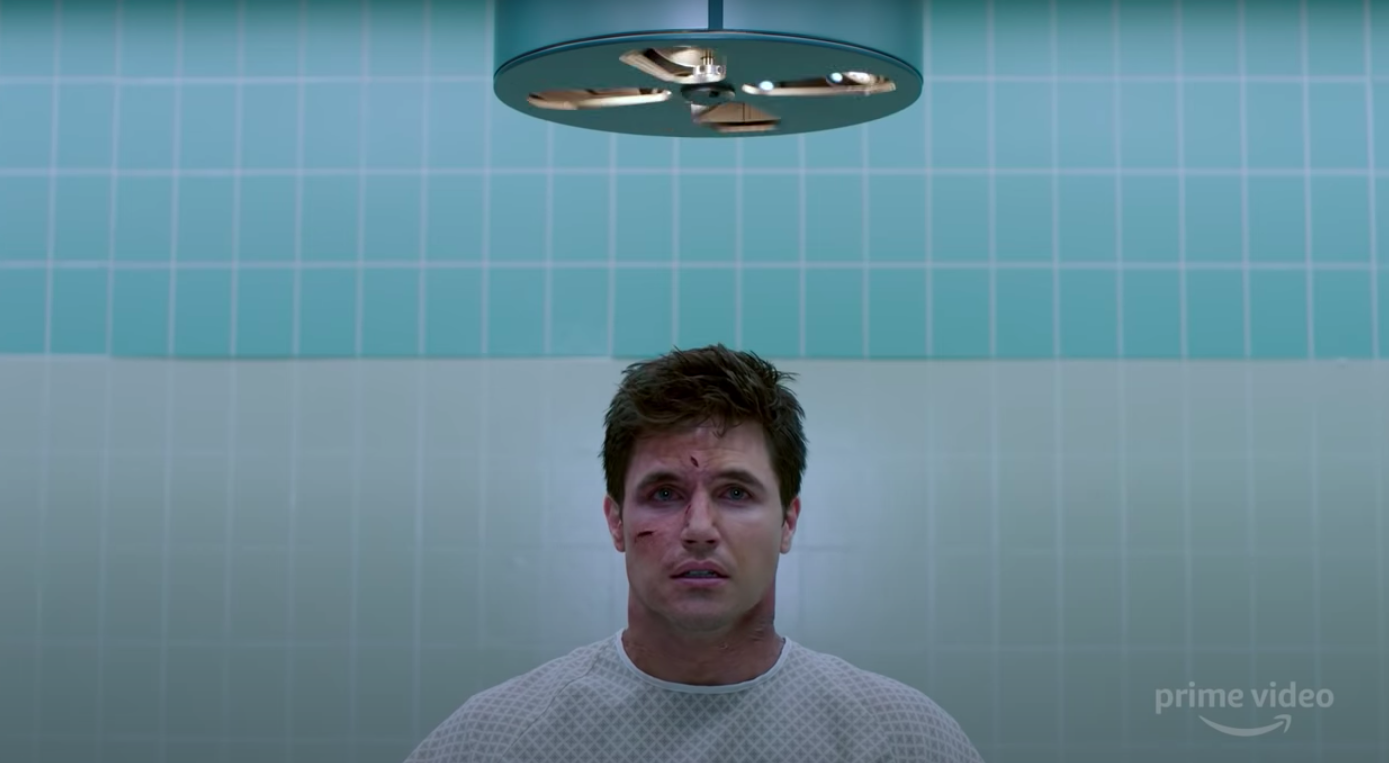 In one of the opening moments of the new Amazon sci-fi series Upload that debuted on Friday, we see people sitting on a subway who can hold their hands apart to watch a movie on a virtualized screen between them. The year is 2033, and in this place and time of boundless technology advancements, cops pull over speeding cars remotely, with the help of drones hovering outside the driver’s window. Self-driving bicycles allow their owners to hop off once they get home while the bike continues on its journey, and store cashiers are merely giant mechanical arms scanning items, obviating the need for human pleasantries exchanged between customers and store clerks.

And yet, all of those high-tech bells and whistles are just the mere windup for what’s eventually revealed as the big idea at the heart of this high-concept series: It’s the fact that people in this world can choose to either die and be on their way to a real, actual afterlife, or they can instead “upload” their consciousness to a perfect, pristine, albeit digital Great Beyond that’s just the way they’d like it (except for this one being, you know, virtual and not “real”).

To say the show treads similar ground as The Good Place might be an appropriate-enough enticement for some viewers to add this one to their coronavirus quarantine binge list. Indeed, there’s a similar romp through the afterlife vibe while also trying to bring about the reformation of the main character, Nathan (played by Robbie Amell). But to say this show is the brainchild of Greg Daniels, the TV comedy veteran who’s been responsible for most of your favorite series for more than a decade (including The Office and Parks and Recreation) — well, that might just be the thing that seals the deal for many of you.

Upload is the first major new project from Daniels since Parks and Recreation took its bow back in 2015 — and Daniels told BGR this is actually an idea he’s been kicking around since his time writing for Saturday Night Live early in his career. Upload gives us 10 episodes of varying length for its inaugural season, during which we’re also introduced to the “account services rep” who basically serves as Nathan’s guide through his digital afterlife (played with a Scarlett Johansson in Her-like sensibility, by Andy Allo). Not to overplay the Good Place similarities here, but Allo’s character (who Nathan is supposed to call “angel”) will remind you in a small way of the former’s omni-powerful Janet, while Nathan’s bro-tastic mien is kind of comparable to a male version of the hard-drinking, hard-partying Eleanor Shellstrop — before she died and went to the good place, of course.

The show mixes satire (at one point, Nathan is denied a refreshment from the in-room fridge in his afterlife because it requires an “in-app purchase”) and a fun skewering of the increasing digitization of our world, along with a decent amount of the kind of zaniness that Daniels probably couldn’t have gotten away with on network TV. There’s a talking dog at one point, and on another occasion, Nathan tries to (sigh) see how far away he can stand from his afterlife toilet and have the stream still reach it.

In his room, there’s a Nest-like dial that he can turn to change the environment he experiences outside — one turn makes it winter, with snow-capped mountains in the distance, while another turn gives him a crispy, gorgeous autumn afternoon to enjoy.

“I came out of a late-night sensibility in the time I was working on Saturday Night Live,” Daniels told BGR. “And there was definitely this feeling of — if you were trying to do more conceptual comedy stuff that was kinda weirder, you could do it at late-night but you really couldn’t do it in a half-hour prime time, you know what I mean? Back in those days. This was sort of pre-cable. My first job had been at HBO, but the HBO back in those days was the HBO that put on the show 1st and Ten … it was not the quality destination back in those days.

“I never really thought I would write the kind of down-the-middle, half-hour sitcom. And so after doing late-night, there was only a few shows I really wanted to work on.” Daniels went on to explain how he followed the woman who was to become his wife out to Los Angeles, got a job writing for The Simpsons, then went on to King of the Hill.

“And then I think things changed around the time I did The Office,” Daniels said. “I feel like the guy who was running NBC who bought The Office, Kevin Reilly, was trying to compete with cable TV more and was looking for, like, a little bit of … a more unusual type of programming.

“I mean, he put 30 Rock and all these interesting shows on in the same year. And so I was able to do that … And it feels like, to me, the audience I was writing for at Fox and at NBC is more on Netflix or Amazon now. That kind of streaming platform it just seems to me, like. They’re doing more interesting stuff. So when it came time to sell this, after The Office wrapped, I definitely wanted to try something a little different. I wanted to try to creatively stretch myself and try something that had more of a cinematic feel to it and like a bigger scope.”

Where Upload departs from his previous series, as well as The Good Place (created by, incidentally, someone who worked closely with Daniels on The Office, Mike Schur), is in its embrace of a slightly darker tone. We didn’t actually see a gruesome death for Eleanor Shellstrop, for example, but we kind of do for Nathan, here. The dark side of technology, as well as class distinctions, also factor more heavily here.

Make no mistake, though; the show is mostly a comedy, and a thankful addition to the streaming landscape, at that. Short, bingeable comedies feel a little like a throwback to the early 2000s and 2010s, before the emphasis shifted to hour-long, prestige drama a la something like Game of Thrones or Breaking Bad. Upload is a bit experimental, to be sure, but the fact that it exists at all will be welcome news indeed for a certain kind of TV viewer. Fine, I’m really talking about myself. Please, oh merciful lords and ladies who govern all of TV land — we’re trying to keep our sanity amid a global pandemic, for crying out loud. More of this, please.

“In talking to all the crew, I would always say that this is not a dystopian future and not a utopian future,” Daniels said about Upload. “It’s some kind of middle-topian future, which, to me, is kind of the funny take on things.

“Other topics of comedy, such as what’s life like for a suburban family, have been imagined a million times. But what’s the comedy that’s going to come from weird issues from a self-driving car? Like, that hasn’t been imagined yet. I think one of the fun things about the show — you get to imagine what life’s going to be like 10 years from now, (and) that hasn’t really been gone over a bunch yet.”