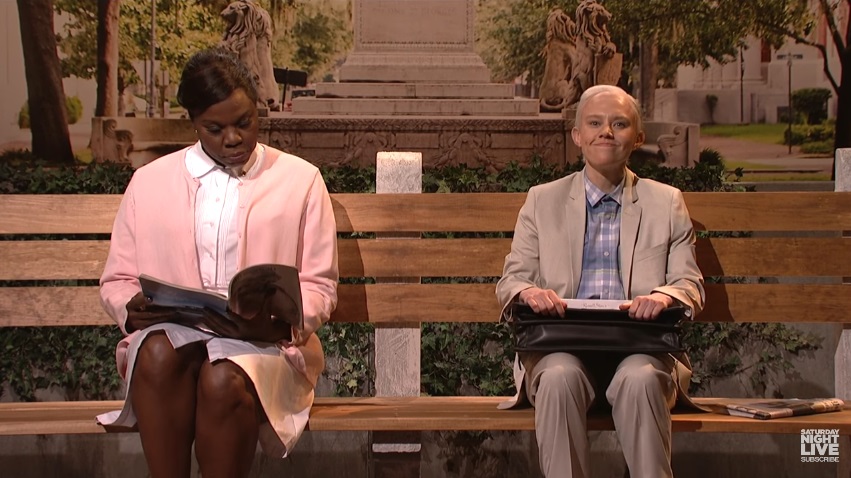 After a two-week hiatus, Saturday Night Live was back in action this weekend and had no shortage of political material to work with. Following a few day stint that saw Attorney General Jeff Sessions recuse himself from an investigation into Russia’s involvement with the recent Presidential election — a move which reportedly prompted a wild outburst from Donald Trump — SNL opened up the show with a Jeff Sessions inspired Forrest Gump parody.

With Kate McKinnon brilliantly portraying Sessions as Forrest Gump, we see sessions chat with a revolving cast of characters — including Vladamir Putin — as he looks back at his political career, his alleged ties with Russia and much more. Even though Forrest Gump is a 23-year old movie at this point, the references used were still familiar enough to deliver on the laughs.

During a quick stint where McKinnon as Sessions is talking to Leslie Jones, there’s even a subtle and clever homage to Lieutenant Dan wrapped inside of a joke about the recent viral photo involving Kellyanne Conway kneeling on a couch in the Oval Office.

“I’m the attorney-general of the whole wide United States,” Sessions said. “This is my good best friend Kellyanne. She ain’t got not legs. Why do you got no legs, Kellyanne?”

From Sessions enjoying a treat from his box of chocolates all the way down to the “Jenny”-esque way he pronounced Kellyanne Conway’s name, SNL’s Gump-inspired cold open was a terrific way to kick off the show’s most recent episode. Incidentally, the Kellyanne kneeling photo made a few other appearances throughout the show.