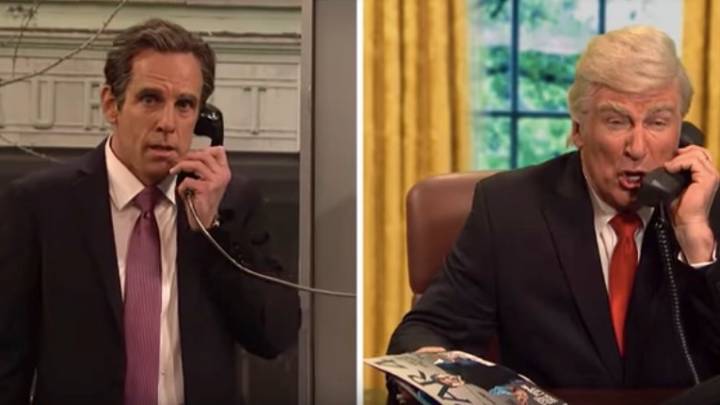 Saturday Night Live kicked things off on Saturday with a new cold open that tackled the hottest Trump news from the past few weeks. While we’re used to seeing Alec Baldwin reprise his Donald Trump role for SNL as well as Kate McKinnon’s portrayal of a wide range of Trump associates, this week’s cold open was packed full of surprise cameo appearances.

“I work in adult films, we’re not really known for our acting,” Daniels said in what must have been a truly emotional moment for her. No, she won’t be remembered for her acting anytime soon. She was so nervous that she said “It’s Saturday Live!” at the end of the open.

Scarlett Johansson and Jimmy Fallon played Ivanka Trump and Jared Kushner, and Fallon actually had lines of his own this time around. Cecily Strong played Melania Trump and McKinnon delivered a hilarious Rudy Giuliani. I can’t wait for an SNL sketch where McKinnon plays all these parts. I’m absolutely convinced she can do it.

Given this plethora of characters SNL featured in last week’s cold open, it’s pretty clear the writers tried to cover as much news as possible about Cohen, Trump’s never-ending Stormy Daniels scandal, and the Giuliani revelations last week. Check out the full clip below: