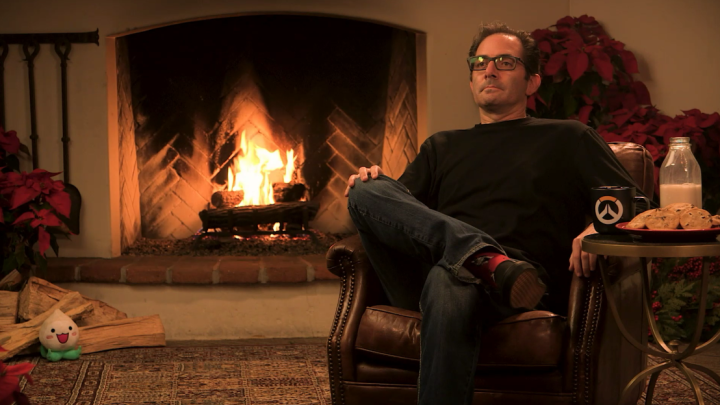 While the holiday time is supposed to be full of happiness and family bonding time in theory, it doesn’t always work out that way in practice. Anyone who’s been stuck at their in-laws for Christmas knows what it’s like to master the art of furtive phone-checking and tactfully not starting an argument over net neutrality, and nothing serves as a better distraction than watching an incredibly weird Twitch stream.

On Christmas Eve, Overwatch director Jeff Kaplan decided to do a stream of an empty chair next to a yule log. Presumably, it was meant to be a funny gag for all five people online last night, but things took a weird twist when Kaplan came in shot, sat down in the chair, and just started….staring.

For nearly ten hours yesterday evening, Kaplan sat in the chair, and just stared. It doesn’t seem to be a loop, since you can see him shuffle and move around. Nope, for some reason, the Overwatch director decided the thing he wanted to do on Christmas was sit immobile, staring off into the distance, trying not to laugh.

Whatever the reason, it worked. Views on the stream peaked at around 39,000, and stayed in the tens of thousands for hours. I’d understand if it was a close-up stream of the Yule log — people want to stream that as the alternative to their own fireplace — but does anyone actually want to invite a stranger to sit in their home, staring? I guess so.

The stream wasn’t without its own drama, however. A boom mic did fall on Kaplan at one point, presumably when the operator fell asleep like everyone else:

Kaplan also humored the masses with a present unboxing:

What a spicy prank Jeff Kaplan, this stream is truly something pic.twitter.com/SMsrroKkLc

The entire video is available for posterity here.

Maybe this was just a clever viral marketing stunt for Overwatch‘s current Winter Wonderland event. It includes a bunch of new skins and cosmetic items, as well as winter-themed maps. The best part however are the additional game modes, which let you take Mei and play her in situations you never would’ve imagined.