Add Netflix to the long line of Internet services that some creative-minded folks have figured out how to use plugins and other digital trickery to hide while at work, along with websites that make your Reddit feed look like email, disguise Facebook so you can waste time in peace and much more. And now comes Mschf Internet Studios, which once launched a Slack channel that gave away $1,000 if you guessed the word of the day and which has come up with an ingenious new Chrome extension that hides your Netflix binge while you’re at the office.

None of this should be construed as us encouraging you to slack off at work by streaming Stranger Things or whatever else is on your must-watch Netflix list. However, if you are set on killing time, this new extension is called Netflix Hangouts, and it works exactly how you might imagine with a name like that.

Basically, you add this free Chrome plugin, and it launches a totally fake conference call that looks like a Google Hangout. Whatever you’re watching on Netflix simply occupies one of the conference call window panes, as you can see in the screengrab below of the way it works. Hey, speaking of which, how appropriate, right? Watching The Office at… the office! 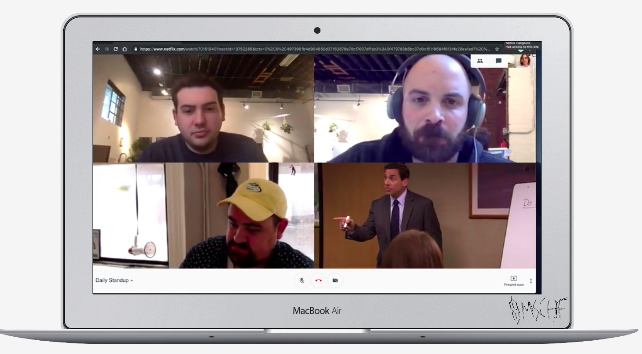 The keen observers amongst you will no doubt have questions and note potential shortcomings here. Such as — isn’t the show you’re watching still a little too visible on your screen? And won’t it be obvious that, you know, those other three guys don’t work at your office? Good questions all, but like Hollywood directors who ignore continuity issues all the time, you can too. In all seriousness, use this plugin at your own risk — and, in the meantime, check out some of the other half dozen or so useful Netflix plugins we’ve covered in the past that similarly bring a number of useful new features to your binge sessions.