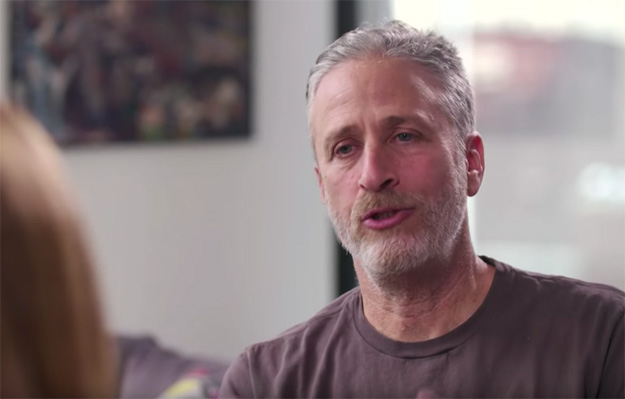 I have to be perfectly honest: I kind of hated Samantha Bee when she was on The Daily Show. OK, “hate” is a strong word, but I was not a fan at all. In fact, I found her segments to be so annoying that I regularly used them as an opportunity to get up and leave the room for a refill or a snack. In other words, at the time I would tend to sit through commercial breaks over Bee’s Daily Show segments.

I’m not a regular watcher of her new TBS show Full Frontal with Samantha Bee, but I have checked it out on a few occasions since it premiered with a fair amount of critical acclaim. While her character on Full Frontal is quite similar to her Daily Show personality, she’s much smarter on the new show and I really did enjoy what I saw. Of course, the show became even more enjoyable on Monday evening when Jon Stewart stopped by for a quick interview.

Bee looks particularly serious as she thanks Stewart profusely and gears up to ask her what we can only assume is an important and pressing question. The Full Frontal host appeared on The Daily Show regularly from 2003 until she left last August, and Stewart seems more than happy to help her. Then, her question: “What do I do with… this guy?”

Bee motions to her side as the camera angle widens to reveal a miniature white pony standing in her office. “Can you take him to your massage farm?” Bee asks politely, joking about the animal sanctuary that Stewart and his wife formed. We won’t spoil the end of the bit, but it’s definitely worth a watch and you’ll find it in the video embedded below.