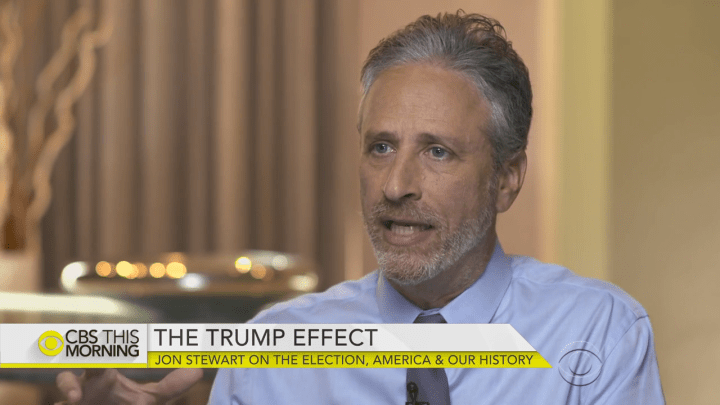 Days after HBO reaffirmed its commitment to getting Jon Stewart’s animated news show on the air in the first quarter of 2017, the host of the upcoming show appeared on CBS This Morning to discuss the results of the presidential election.

While we’ve seen Stewart more than once since he left his post at The Daily Show, this is the first sit-down interview he has given post-election. Unsurprisingly, he has plenty to say about Trump’s shocking win, but remains optimistic about America:

“I don’t believe we are a fundamentally different country today than we were two weeks ago,” says Stewart to CBS This Morning host Charlie Rose. “The same country, with all its grace and flaws and volatility and insecurity and strength and resilience exists today as existed two weeks ago.”

Though Stewart feels for the individuals who will be negatively impacted by the election of Trump (providing many of his proposed policies come to pass), the comedian knows that “this fight has never been easy.” And while Trump might be a reaction to the political system as a whole, Republicans are going have a sudden change of heart about the power of government and reap the benefits.

Stewart’s views are clearly more aligned with the progressive crowd than the conservative one, but countless Americans on both sides of the aisle will appreciate having his voice back on the air when his HBO show kicks off in 2017.