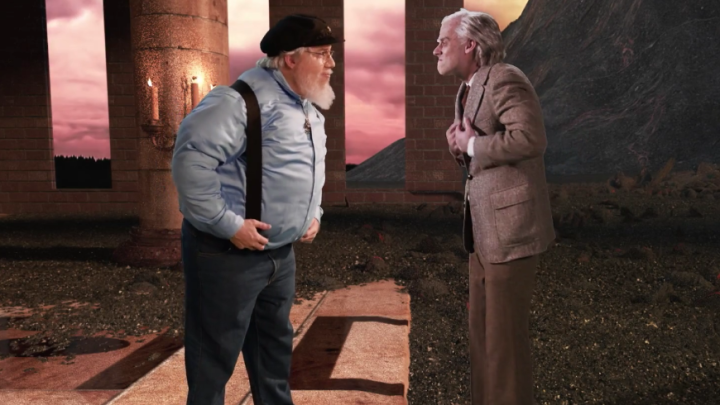 As a longtime fantasy nerd, I have a soft spot in my heart for both George R.R. Martin’s A Song of Ice and Fire and J.R.R. Tolkien’s Lord of the Rings series. While I think Martin creates more fully developed overall characters in his stories — he writes women way better than Tolkien ever could, for instance — there’s no denying that the original sagas of Bilbo and Frodo Baggins were groundbreaking classics.

So which acclaimed fantasy author is really better? That’s the question that the Epic Rap Battles YouTube channel recently tried to answer when it pitted actors playing Martin and Tolkien against each other in a hilarious spoof.

As is the case with all Epic Rap Battles videos, the Martin-vs.-Tolkien fight is loaded with clever puns and brilliant put downs.

Martin isn’t intimidated by this, however, and he responds that “You went too deep, professor tweed pants / We don’t need the backstory on every fuckin’ tree branch / Even the names of your characters suck / You’ve got Boffers and Bofurs and Brandybucks.”