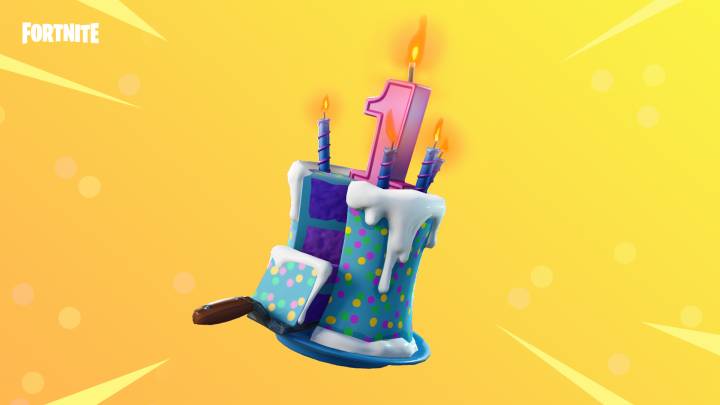 It’s not often that a new game comes along and completely dominates the conversation for months on end, but that’s exactly what Fortnite has accomplished in its first year on the market. In celebration of the game’s success, developer Epic Games is hosting a first birthday event in-game, which officially kicked off on Tuesday morning.

As announced last week, the event will feature a series of birthday challenges that will unlock rewards for players who complete them: Play 14 matches to gain 5,000 XP, deal 1,000 damage to unlock the Fortnite Birthday! emoticon, and dance in front of ten different birthday cakes to unlock the Happy Birthday! spray. Once you’ve completed all three challenges, you’ll earn the Birthday Cake Back Bling for your character.

In addition to the birthday challenges, Epic Games also decorated the Battle Bus with streamers and wrapping paper, scattered fun birthday items in the game world, and even hid some fun new Easter eggs around the map, including a skeet shooting minigame, and a tribute to a viral video in which a player attempted to rescue a teammate.

It looks like the Birthday Challenges are late to the party for some Battle Royale players.

But that’s not all, as the birthday event is just one part of the v5.10 patch that rolled out today. Epic is also bringing back the popular Playground Mode on Wednesday with a bevy of additions, including the ability to switch teams in-game, increased drop rates for ammo and bounce pads, and golf carts (which now spawn every time).

Epic has also added a new Compact SMG weapon in Battle Royale, has changed the way that Slurp Juice works, and has adjusted the time it takes to build with certain material. None of these should significantly affect the way the game is played, but it might take a few matches to get used to all the changes.