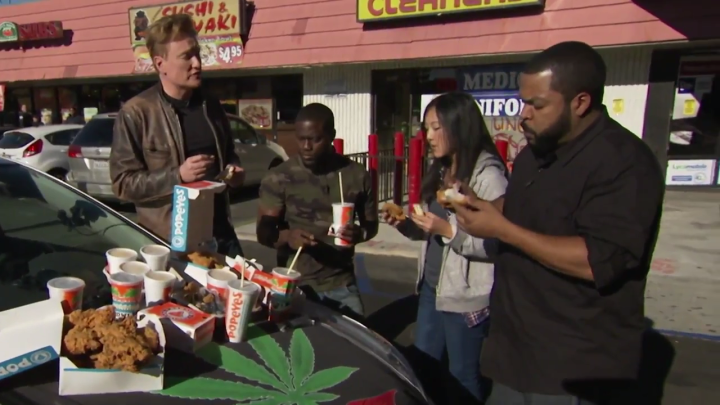 It’s been a while since we checked in on Conan O’Brien’s shenanigans, but based on how much attention his latest video has been getting, this might be as good a time as any to jump back in. This week on his TBS show, Conan decided to give back to his hard-working staff by helping Diana Chang, a member of the Team Coco digital team, prepare for her driver’s test.

As you might expect, it goes off the rails fairly quickly.

DON’T MISS: ‘Star Wars’ fan theories about what will happen in Episode VIII

The ride starts out innocently enough, with Conan making a few terrible suggestions, like yelling at anyone who passes Diana on the road. But after a few minutes of aimless driving, the two make a pit stop to pick up Conan’s friends.

Those friends happen to be Kevin Hart and Ice Cube (O’Shea Jackson).

If you weren’t aware, Kevin Hart and Ice Cube are starring in a new movie together called Ride Along 2, which hits theaters on January 15th. It only makes sense that the two would “ride along” with Diana and Conan to promote their movie.

But unlike a typical ride along with a student driver, Hart and Cube are dedicated to making Diana’s driving experience as stressful as possible — threatening other drivers with thrown pennies, relentlessly mocking Conan and nearly jumping out of the moving vehicle when sirens begin blaring behind them.

It only gets better from there. You can watch the full video from Conan below: