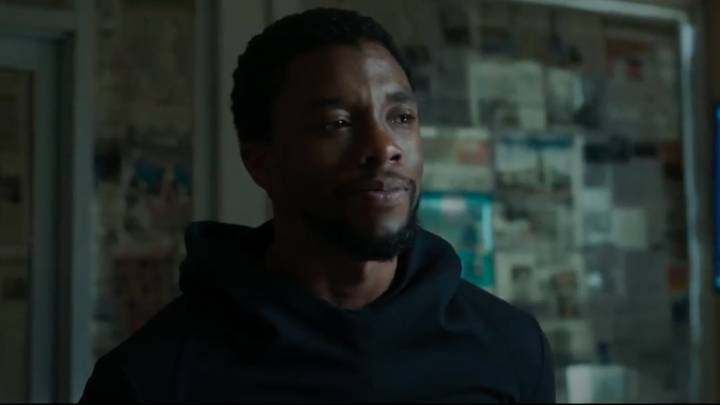 Representatives of actor Chadwick Boseman confirmed the sad news late Friday night that the 43-year-old actor and star of such films as Marvel’s Black Panther has died after a 4-year battle with colon cancer.

They confirmed the news in a tweet, noting that he’s fought the illness for years, even while giving audiences performances in major motion pictures like Netflix’s recent Da 5 Bloods. His portrayal of the king T’Challa in Marvel’s Black Panther, though, will no doubt be the role for which he’s most-remembered. “It is with immeasurable grief that we confirm the passing of Chadwick Boseman,” the statement from Boseman’s representatives reads. “It was the honor of his life to bring King T’Challa to life in Black Panther.”

I haven’t seen a lot of movies where the audience was collectively moved to applaud or exhibited passionate, loud displays of emotion, but I can still hear the sounds of shocked theatergoers when we saw the Black Panther dissolve after Thanos’ finger snap along with several other heroes. And then the roar of excitement from the entire crowd in the theater I was in when Black Panther returned for the climactic battle in Avengers: Endgame — it was the kind of spontaneous eruption of joy you don’t often get in public at the theater. And it was clear that the character was important and mattered to so many fans in a way you didn’t often see from typical Hollywood fare.

Boseman’s final tweet was posted earlier this month, the same day that Democratic presidential nominee Joe Biden chose California Sen. Kamala Harris as his running mate. The tweet simply read “YES” and included a picture of Boseman and Harris in an embrace.

Two years ago, Boseman visited St. Jude, the children’s hospital here in my hometown of Memphis to visit with children fighting cancer. In hindsight, that visit is all the more poignant to consider now, knowing that Boseman at the time was likewise battling the same thing himself that many of those children were.

It’s not every day that St. Jude gets a visit from an Avenger! Thank you @ChadwickBoseman for stopping by to bring joy to our patients and learn more about our lifesaving mission! ❤ 🎉 pic.twitter.com/7RwPO7qgPD

Here, meanwhile, are reactions from Twitter to Boseman’s passing, with even Biden himself weighing in:

The true power of @ChadwickBoseman was bigger than anything we saw on screen. From the Black Panther to Jackie Robinson, he inspired generations and showed them they can be anything they want — even super heroes. Jill and I are praying for his loved ones at this difficult time.

Chadwick was really out here shooting all of these huge action movies while fighting stage 4 colon cancer. Man. Strong isn’t even the word.

Marvel Heroes have been an inspiration for me since I was a little kid. To see one of those heroes not here anymore, it's devastating.

Chadwick Boseman was a legendary actor.
He was a giant role model for all of us.
He was our King,

and he still is.

We never knew what you were dealing with … you remained so gracious. From your phenomenal roles such as Jackie Robinson, Thurgood Marshall, James Brown & of course Black Panther. You’ve shown the world what a real life super hero looks like. ❤️#ChadwickBoseman pic.twitter.com/OXeETWpZrG

Devastated. Years ago, I wrote my masters thesis on black superheroes & went deep into the canon of the original Black Panther comic. You can imagine how the comic book nerd in me thrilled at seeing Chadwick Boseman’s portrayal of T’Challa. That will never die. #WakandaForever pic.twitter.com/HQ6aCVqBvg

It's harder to do what Chadwick Boseman did the last 4 years. Dig deep. When you think you're tired, go deeper.

Think about WHY you're waking up. Think about what you love and are passionate about.

The biggest mistake we make in life is thinking we have plenty of time.